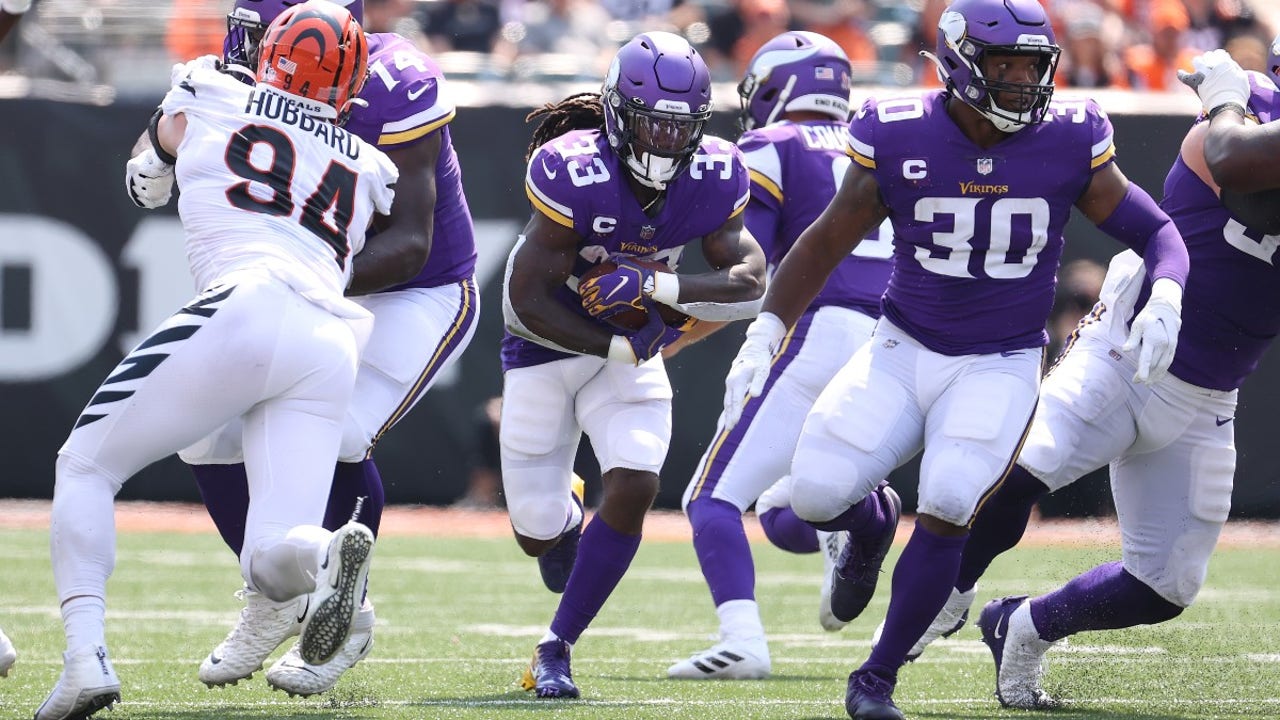 “You cannot leave the game in the hands of the referees”

Dalvin Cook # 33 of the Minnesota Vikings runs with the ball against the Cincinnati Bengals at Paul Brown Stadium on September 12, 2021 in Cincinnati, Ohio. ((Photo by Andy Lyons / Getty Images))

MINNEAPOLIS – There was a lot of criticism to be made after the Minnesota Vikings opened the 2021 season with a 27-24 loss to the Cincinnati Bengals in overtime.

Two players who found themselves staring in the mirror within 48 hours of the game: Dalvin Cook and Garrett Bradbury. Cook fumbled in overtime and Bradbury led an offensive line that struggled against penalties and pressure in the loss to the Bengals.

Cook was asked about his fumble on Wednesday, as the Vikings begin Week 2 preparations for the Arizona Cardinals. As the offense moved towards a potential winning field goal, Cook dropped the ball and Cincinnati recovered. This led to the Bengals’ winning kick. Cook has 13 fumbles in 44 career games, including nine in the past two seasons combined.

“I’m a pro, man. I’ve been playing soccer since I was 4. I’ve fumbled before I just gotta be better. You get the ball so many times in a soccer game, it’s precious to take care of this football. It’s like your world when you have it in your hands, “said Cook.” I have to take care of it and move on. “

Cook admits gambling still leaves a bad taste in his mouth, as a winnable game has slipped away. Turnover was scrutinized as it looked like Cook could be down by contact, but there was not enough video evidence to cancel the call on the ground.

He was asked on Wednesday if he was surprised that the appeal went down as a fumble.

â€œWhen you’re in a hostile environment like that, you can’t leave the game in the hands of the referee. It’s part of being a pro, taking care of the football and being consistent in the game. what I do, â€Cook said. “I wasn’t surprised, it was a 50/50 call, they made the call and that’s what we have to live with.”

GARRETT BRADBURY: “I KNOW THE PENALTIES, THEY WILL KILL YOU”

The Vikings’ penalty numbers were equally garish and difficult to watch after Sunday’s loss. There were 17 total infractions called, 12 applied for a total of 116 yards.

There were four on the first offensive series alone. CJ Ham has been called twice for false starts. In total, there were six false starts, four calls on hold and one for unnecessary harshness. It was difficult to watch, even for die-hard Vikings fans.

Brabury, like the rest of the team, had no explanation for the flags.

“I don’t have a good answer for that one. I know the penalties, they kill you. You’ve all seen it, it puts you behind the eight,” Bradbury said. “When you’re 2nd and 15, 2nd and 20, 3rd and 20, not a lot of gambling calls that can get you out of that. All the penalties, they’re all correctable.”

The Vikings faced six third downs for at least 15 yards on Sunday, and five of them were over 20 yards. When facing a third and 8 or less, they were 6 out of 8 on conversions. Kirk Cousins, in addition to being sacked three times, was under pressure throughout the game.

Due to the penalties and multiple scores, the Vikings had to move away from their bread and butter: running the ball. Cook averaged just three meters per run. Bradbury says it’s about looking at the defense before the snap, making a call with the protection and sticking to it.

â€œMaking sure everyone is on the same page is kind of an offensive line game. Making sure we all understand what we’re doing, call up quickly and let’s go,â€ said Bradbury. “When we play clean we do what we’re supposed to do, we’re really good.”

We will know on Sunday how many of those errors are corrected in training this week.

How Plant-Based “Meat” Can Help You and Save the Environment

Florida-Alabama: what you need to know