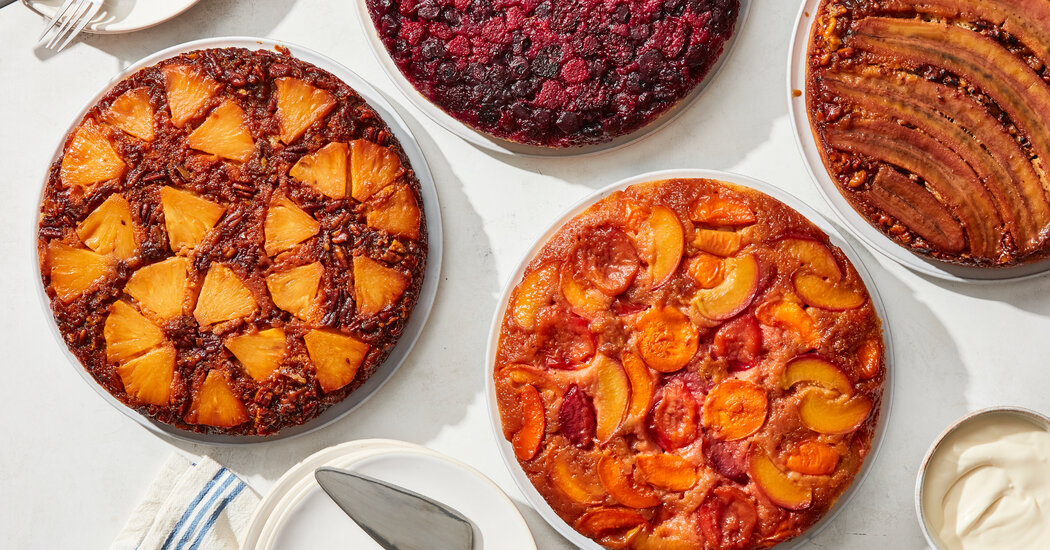 With brilliant yellow rings surrounded by fluorescent red cherries, pineapple upside-down cake is a beloved American dessert: intimate, nostalgic, boldly geometric. Since the recipe was popularized in the 1920s, it has become so ingrained in our confectionary consciousness that an upside-down cake made with anything else seems like a mere afterthought.

But other fruits – juicy summer peaches, apricots, plums and nectarines; mounds of purple berries; velvety bananas – can make upside-down cakes as good or even better than the usual pineapple. And it’s just the thing to cook right now, especially if you’re wondering what to do with that excess stone fruit and berry leaking sticky nectar all over your kitchen counter.

Upside-down cakes don’t require the pristine fruit you’d want for a shortcake or pie. No matter how wrinkled your peaches are or how sagging your blueberries are, once caramelized and baked under the batter, they will become syrupy and colorful, a shimmering crown with no further embellishment needed.

Just as essential as an overturned cake’s ability to use languid fruit is its ease. The dough is a cinch to whisk in a bowl, making it quicker and easier than a pie or pancake crust. Then you can bake the cake in the same pan you used for the fruit – perfect for rented homes where kitchen equipment is scarce, parchment paper non-existent.

To cook one would be to follow in the footsteps of a long line of pastry chefs, who inverted fruity desserts for centuries before sunny slices of pineapple were piled high in tin cans.

The most famous example, the true queen of all upside-down desserts, is French tatin tart. Created in the 19th century by sisters Stephanie and Caroline Tatin in their hotel in the Loire Valley, it was based on an even older French tradition of upside-down apple pies. Made from apples caramelized in sugar and then baked under a pastry crust, these two confections are akin to a whole genre of upside-down apple pancakes, including pancakes. sancial (also from France), German apple pancakes called apfelpfannkuchen and American colonial apple tanseyall of which consist of a simple pancake batter covering the fruit, rather than a crust.

In the United States of the 18th and 19th centuries, cakes were often baked in skillets over hot coals, making them accessible to Americans without an oven. Simmering fruit in syrup or butter in the pan before adding the batter was a very common practice. Whether the cake was eventually flipped over to serve or offered straight from the pan, the concept of fruit and caramelized cake was the same (although much prettier when flipped on a serving platter).

One of the first recipes called “upside-down cake” was published in 1923 in the now defunct Syracuse Herald. Prunes were the fruit in question, layered over brown sugar and butter, and speckled with nuts. Other versions, using pitted apricots and cherries, were also fashionable in the early 20th century.

The pineapple became essential in 1926 when Dole sponsored a recipe contest. There were 60,000 entries; 2,500 was for a version of upside-down pineapple cake.

The pineapple has remained on top of the upside-down pile ever since. In my version of the classic, I removed the cherries, replaced the fresh pineapple with canned pecans, and added for texture. (I also used nuts in my banana variation, which has bananas-like vibes, but with the happy bonus of cake and crunch.)

While the upside-down cake recipe is simple, there are some best practices for the most tender crumb and a fruit filling that’s just sweet enough without being completely cloying.

The first is to caramelize the sugar before adding the fruit. Many vintage recipes skip this step in favor of simplicity, instead of just melting the butter and then sprinkling the sugar on top. While this works, it results in a neutral sweetness with a muted caramel character.

Caramelizing the sugar deeply before adding the fruit tempers it, bringing out a slight bitterness and adding layers of nutty complexity, and it only takes a few minutes. Don’t worry if the sugar clumps and seizes, it will melt again when you bake the cake, becoming silky smooth.

Another trick is to bake the cake longer than you would a regular butter cake. This is due to the moisture in fruits, especially stone fruits and berries, which have a high water content that can make the crumb soggy. The surface of the cake should be golden brown all over, with dark edges that give a slight crackle. A toothpick inserted in the middle should come out without crumbs.

Always let your cake rest for about 10 to 15 minutes before inverting it onto a platter to allow the fruit and caramel to firm up a bit. But don’t let it last longer, otherwise the caramel could cool and stick the fruit in the pan. Of course, you can always remove it and put it back on top of the cake. Then slice, serve, and prepare to fall head over heels in love with upside-down cake.