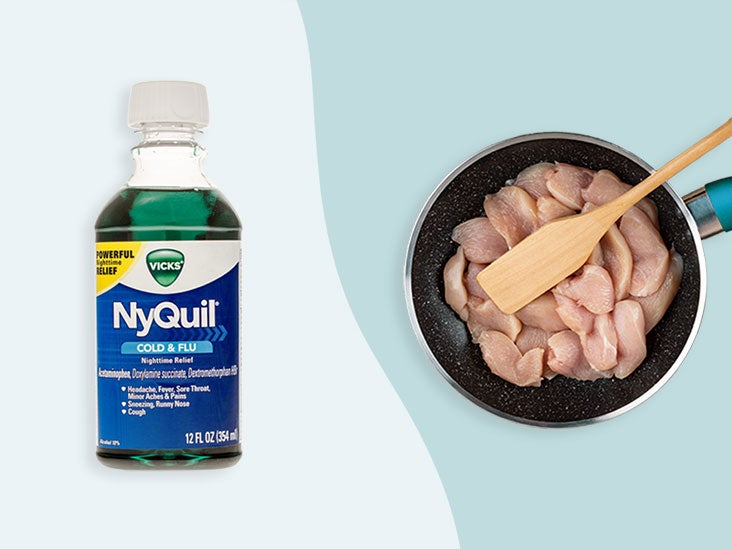 TikTok trends come and go constantly. Some, like the “Hot Girl Walk”, are worth considering – they have physical and mental health benefits.

But the latest challenge known as NyQuil Chicken doing the rounds has caught the attention of the US Food and Drug Administration (FDA), and not for good reason.

In fact, the FDA earlier this month, warning about the challenge, which, as the name suggests, involves cooking chicken using the over-the-counter cough and cold medicine NyQuil.

“Boiling a drug can make it much more concentrated and change its properties in other ways,” the statement said. “Even if you don’t eat chicken, inhaling the drug vapors while cooking can cause high levels of the drug to enter your body. It could also hurt your lungs.

Health care providers agree unequivocally: do not attempt this challenge.

“It’s a terrible idea because medications should only be used as directed,” says Betty Choi, MD, pediatrician and author of the Human Body Learning Lab.

At the same time, there were backlash over the warning, saying it brought attention to a relatively unknown challenge.

But doctors and mental health care providers share that it’s still important to discuss safe drug use, especially with children, teens and adults in their early 20s.

Find out the risks, what to do if someone seems to have overdosed on NyQuil, and how to discuss drug abuse with young people.

Kelly Johnson-Arbor, MD, FACEP, FUHM, FACMT, medical toxicologist and co-medical director of the National Capital Poison Center, explains that NyQuil is made from a combination of ingredients:

It is commonly used to relieve symptoms of:

Although it can be an effective way to relieve illnesses and allergies, its overuse carries several risks.

Howard Pratt, DO, medical director of behavioral health at Community Health of South

Florida, Inc. (CHI) states that these risks include:

Pratt agrees with the FDA that simply heating NyQuil even without consuming it can make it more potent, just like Johnson-Arbor.

“When the pan is heated, the alcohol and other volatile compounds in NyQuil evaporate, leaving behind a concentrated amount of potentially toxic NyQuil ingredients,” Johnson-Arbor warns.

Given the many risks of abusing NyQuil, including overcooking it, what would tempt anyone to do so?

Providers share several factors at play, particularly among adolescents and adults under 25.

Experts note that the human brain does not fully develop until around the age of 25.

“The part of the brain that develops last is the frontal cortex, which is responsible for cognition and judgment,” notes Julian Lagoy, MD, psychiatrist at Mindpath Health.

Young people are more likely to engage in risky behaviors because their brains are still developing.

“During this developmental time, they are prone to take risks and participate in challenges and challenges that older adults would not attempt,” says Sara Siddiqui, MD FAAP of NYU Langone Huntington Medical Group and assistant professor of clinic at NYU Hassenfelds Children’s Hospital. .

Of course, TikTok’s audience is quite young.

According to 2022 PEW Research, about two-thirds of teens said they had used the platform. This means that teens and young people are particularly at risk for “challenge” trends like Chicken NyQuil.

Peer pressure has long been associated with drug abuse, particularly among adolescents, but research suggests it can continue well into adulthood.

A of 359 people aged 18 to 29 suggests that peer pressure is linked to drug abuse (or abstention).

A of people aged 18 to 52 indicated that peer pressure to drink alcohol could trigger feelings of isolation and a decision to give in and drink.

Choi agrees that peer pressure is a risk factor for participating in the NyQuil Chicken Challenge, especially among people who seek approval from others.

TikTok users who participate in the NyQuil challenge do not appear to suffer any negative consequences, giving others a false sense of security.

However, this sense of security may not be the only thing wrong.

“What many kids and even adults often don’t realize about a lot of these social media challenges is that people are pretending and not really doing what they seem to be doing,” says Pratt. .

Johnson-Arbor points out that the videos don’t typically show people eating cooked chicken at NyQuil, though they can be edited to look like they are. Videos can also easily avoid showing negative side effects.

Experts share that it’s important to discuss the NyQuil Chicken Challenge with people who are likely to participate.

Parents and other trusted adults can especially facilitate these discussions with teenagers and adults in their twenties.

But does mentioning the NyQuil Chicken Challenge draw unnecessary attention? Already, the FDA has received backlash for issuing a warning.

According to data TikTok provided to BuzzFeed News, there were only five searches for NyQuil Chicken before the warning. Since then, there have been thousands.

Choi says discussing drug abuse, even in general, can help.

“Even if your child isn’t familiar with TikTok videos, it’s a good idea to talk about medications and medication safety,” she says.

Choi and others shared how to approach the conversation.

In addition to not participating in these challenges, adults can also serve as role models when using medication or administering it to a child.

“Model reading the drug label and double-checking the dose,” Choi suggests. “Talk about where you keep the drugs and why it’s a safe place for storage.”

Choi also recommends using this time to discuss the purpose of the medication.

Approach a place of care and respect

The “just say no to drugs” lesson given by parents as their children approach high school has changed.

Siddiqui suggests choosing a time when the young person is ready and open to talk. Then ask open-ended questions about what they know about certain drugs and about the behaviors of their friends.

Lagoy says it’s important to make sure the person knows why you want to discuss drugs more — not to scare them off but to guide them.

If your child or friend has already participated in the challenge, it is natural to feel concerned.

“I would always talk to them and respect them with the goal that they don’t do it again,” Lagoy says. “Sometimes kids are more likely to do something if you upset them or humiliate them so they can be ‘rebellious’. If you talk to your kids with respect and love, they’re more likely to listen to you and honor your judgment and your wisdom.

Search to understand Why they did, explain the dangers and discuss better ways to assess social media challenges, like asking a trusted adult for advice.

Drug abuse is one part of the NyQuil Chicken Challenge. Social media is the other.

The NyQuil Chicken Challenge isn’t the first dangerous thing to surface on TikTok, and it won’t be the last.

Pratt suggests reminding young people that not all videos on social media are real.

“You also want to make sure they understand that…this is not an example of what actually happens in the real world where there are often real consequences,” Pratt says.

In short, the NyQuil Chicken Challenge is another example of social media madness.

Misuse of NyQuil can lead to a host of health issues, ranging from breathing difficulties to seizures and in some cases, even death.

Although the trend may have collapsed before the FDA warning, it’s still worth talking to the young people in your life as a “teachable” moment.

You can take the opportunity to discuss the responsible use of social media and over-the-counter medications.

Beth Ann Mayer is a New York-based freelance writer and content strategist specializing in health and parenting writing. His work has been published in Parents, Shape and Inside Lacrosse. She is co-founder of digital content agency Lemonseed Creative and is a graduate of Syracuse University. You can connect with her on LinkedIn.

October Events Guide: Festivals of food, art, comedy, jazz and all things Halloween are on the horizon