The One Show’s Alex Jones Slips On ‘Difficult’ A-List Guest, Admits ‘He Just Didn’t Get It’

ALEX Jones revealed which A-List stars were her favorites to interview and which ones she found difficult.

The One Show presenter, 45, appeared as a guest on Saturday Kitchen on June 18 when she was interviewed by Matt Tebbutt.

During a cooking segment where guest chefs Tom Parker Bowles and Ching-He Huang caused a storm in the kitchen, the presenter was asked about previous guests on the BBC evening show.

Alex, who co-hosts The One Show with Jermaine Jenas, exclaimed that she is absolutely not intimidated by celebrity guests.

She explained: “People, I think, they assume – and maybe it’s the same Matt on this show – people assume, ‘Oh my god, those big Hollywood stars…! “”

Alex then sarcastically added, “Well… They can be tricky, can’t they!?” 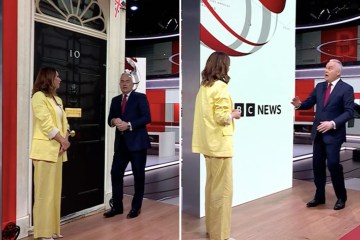 The studio burst out laughing when she added, “I never name names… But Jared Leto, for example.”

Alex interviewed Hollywood actor Jared in April, where they had a bit of an awkward moment after realizing they were both wearing similar outfits.

She made a light-hearted joke at the start of the interview, telling Jared, “You’ve got the memo! The frilly shirt!”, at which he simply made a disgusted face.

The star then addressed the awkward Saturday Kitchen encounter, saying, “You know, he just didn’t get it…the sense of humor is so different!”

However, she added that: “Most of them are absolutely adorable, Tom Hanks, I mean come on, whatever you want him to be!

“And then sometimes there are lovely people like Nicole Kidman and they come in and I literally didn’t ask any questions.”

The Welsh star explained that she was hypnotized by the Australian actress.

Father’s Day: Summer Clayton is a “proud dad” of 3 million people on TikTok