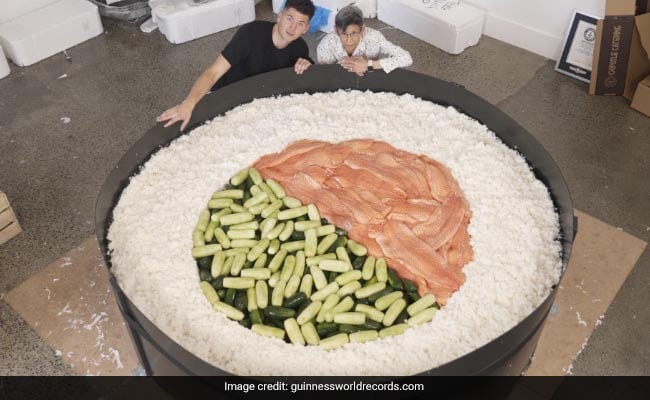 Chefs Nick DiGiovanni from the United States and Lynn Davis from Japan have broken two Guinness World Records. The first record is the fastest time to fillet a 10-pound (4.5 kg) fish and the second record is to make the widest sushi roll. What’s more amazing is that they broke a record set by celebrity chef Gordon Ramsay when trying to fillet a fish. The two chefs shot to fame after their cooking videos went viral on TikTok, where they together have more than 22 million followers, according to the Guinness World Records (GWR) website.

The duo attempted the records in Boston, USA, as the team created a gigantic roll weighing about the same as 45,000 full-sized sushi rolls, using 907.1 kg of rice to well-seasoned sushi, 500 pounds of sushi-grade salmon, 500 pounds of fresh cucumbers, thousands of nori sheets and millions of sesame seeds, the GWR website added.

The website further stated that the big roll was 2.16 meters long and required three hours and a crew of eight to prepare. “We have lots and lots of salmon, and these babies are not going to spin themselves,” chef Nick DiGiovanni told the organization.

Guinness World Records added that in an attempt to break Gordon Ramsay’s record of one minute five seconds for the fastest time to fillet a 10-pound (4.6 kg) fish, Mr DiGiovanni began slicing and to dice a 4.5 kg salmon. In just one minute and 0.29 seconds, the 2019 MasterChef finalist broke Mr. Ramsay’s record of 4.71 seconds.

The chef duo enlisted a young engineering student from Northeastern University to create the widest sushi roll. The student helped them create the inner mold that would temporarily hold the filling ingredients and an outer support structure to hold the sushi roll together.

Mr DiGiovanni said the biggest challenge was not creating the gigantic sushi roll, but pulling the mold, which held the salmon and cucumber in place, from the middle. The duo also trimmed the roll to perfection by creating a pattern around its center using more cucumbers before being judged by official Guinness World Records referee Andrew Glass.

Read also : Watch: A man balanced 125 scoops of ice cream on a cone and broke a record

Chef Lynn Davis told the Guinness World Record, “This thing will taste as good as it tastes.”

With their roller measuring 0.06 meters longer, they beat the previous record set by Daniel Ramirez of Chile which was 2.10 meters.

To avoid any food waste, Mr DiGiovanni added: “This whole sushi roll will now be picked up by my Farmlink teammates and donated to a homeless shelter in Boston.”

Featured Video of the Day

Will TikTok eat lunch from the Michelin Guide?