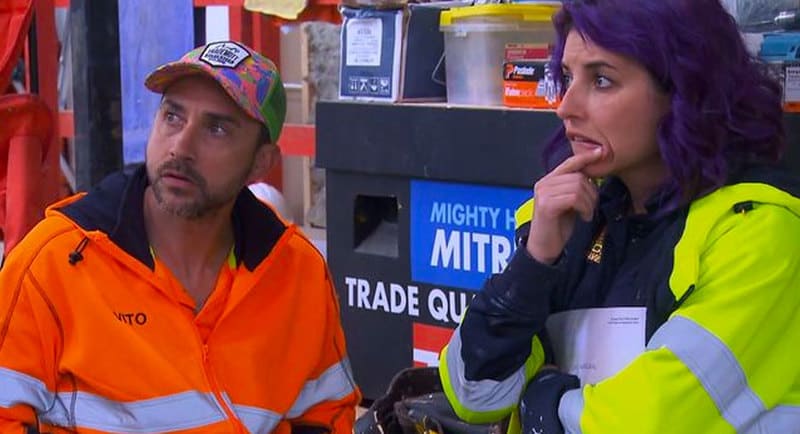 In total television ratings, The block was the best non-news show with 1.406 million after seeing its ratings increase by 24%. The episode saw the tension between the teams escalate when Tanya and Vito and Josh and Luke declined an invitation to Ronnie and GeorgiaThe winners are the Grinners Dinner.

SAS Australia rose 32% to 1.236 million viewers for his episode which saw recruits take a hand-to-hand combat test which saw Alicia Molik resign after an assault by Jana Pittman and Pierre Murray withdraw medically after dislocating your elbow against Marc Philippoussis.

At home and away had 1.206 million viewers after a 17% increase in its nighttime audience.

Did you pay attention? was the first show in 10 with 1.195 million viewers, an increase of 19%. The featured episode Rosehaven co-stars Luke McGregor and Celia Pacquola.

The masked singer was up 17% to 914,000, while his revelation of Lote Tuqiri Turned out to be celebrity under the PiÃ±ata costume was up 10% bringing it to just over 1m.

â€¢ Neuf wins the evening as the No. 1 channel and main network

A topical matter had 801,000 viewers while it covered Cecil kennedyis arrested by the detective inspector Paul Quigg, who worked on the case concerning the 21-month-old child Jordan thompsonthe death of in 2005.

The block had 876,000 like Tanya and VitoThe idea of â€‹â€‹the living room below their living and dining room was compromised when a power supply was discovered under the floor. Teams also had the option to prepare their laundries for cabinet installation even though it is Living and Dining Week, due to the schedule change following the fraud scandal.

The Winners Are Grinners dinner was hosted by Kirsty and Jesse after their victory for Kitchen Week. Since Ronnie and Georgia and Mitch and Mark were still finishing the cooking of the Tombolo Academy, dinner takes place at the school. Everyone introduces themselves, even the host Scott Cam with McDonald’s for the teams to eat.

This episode was the best non-news program of the evening and appeared in last week’s episode which had 812,000.

Under investigation with Liz Hayes had 412,000 viewers as the show examined the 2010 death of a 24-year-old Phoebe Handsjuk whose body was discovered deep in a garbage chute at a luxury apartment complex in Melbourne.

At home and away kicked off its week by drawing an audience of 631,000 viewers, making it the best non-news show on Seven last night.

SAS Australia then followed with 599,000 as the 10 remaining recruits completed halfway. The episode saw no rookies return home after the celebrities had to rappelling down a sheer 90-meter cliff, then split into two teams for a mission through a dark tunnel, under the leadership of the leaders. team. Marc Philippoussis and Dan Ewing.

Seven then aired the latest entry in The Terminator franchise, Terminator: Dark Fate, which had an audience of 234,000 people.

The project was 333,000 (6.30pm) and 532,000 (7.00pm) as the show discussed tensions in parliament over climate change policies and the New South Wales roadmap announced by the state government.

The masked singer had an average audience of 597,000 before 719,000 tune in to see Alli Simpson revealed as the performer under the lighting costume. Simpson’s interpretation of Rachel platten‘s Fight song, was surpassed by Kebab’s sotake ulful on the Otis redding hit Try a little tenderness.

Did you pay attention? then had 684,000 viewers and featured Tony Martin, Melanie Bracewell, Lloyd Langford, Alex Ward and Ed kavalee. The show was # 1 in the 16-39 demographic.

Four corners investigated Australian football powerbrokers. This included foreign owners funding the City of Melbourne, Sydney FC and Brisbane Roar, to investors supporting Adelaide United, and looked at the finances and personalities behind the sport. The episode drew 431,000 viewers.

The best program on SBS last night was Secret Scotland with 182,000. 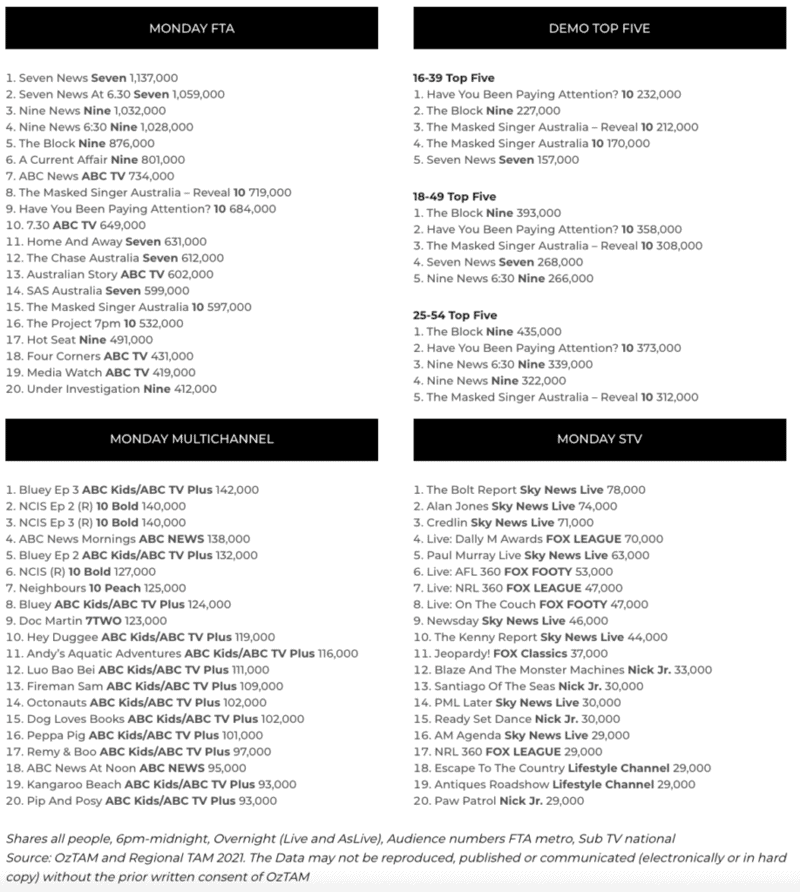