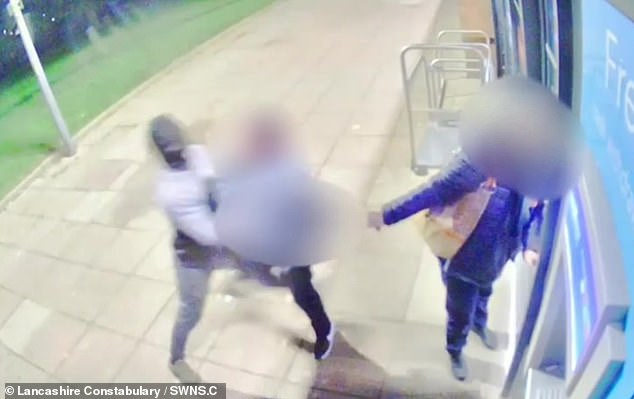 Terrifying moment, staff were pinned to the Co-Op storefront and robbed by a gang armed with a hammer and kitchen knife before running away with money in a duvet cover

By Kate Dennett For Mailonline

Terrifying footage captured the moment Co-Op staff were stabbed by hooded thieves as they closed the store.

In the CCTV clip, shot at 10:10 p.m. on Saturday in Leyland, Lancashire, three members of staff are seen leaving the store and waiting outside while one of them locks the door.

Three men armed with weapons, including a hammer and a kitchen knife, then appear and slam the workers against the storefront, before forcing them to unlock the door and push them back inside.

The men ordered staff to put a “significant amount” of cash and cigarettes in a duvet cover during the raid, police said.

Terrifying CCTV footage shows three balaclava-clad men armed with weapons, including a hammer and kitchen knife, storm staff and force them in 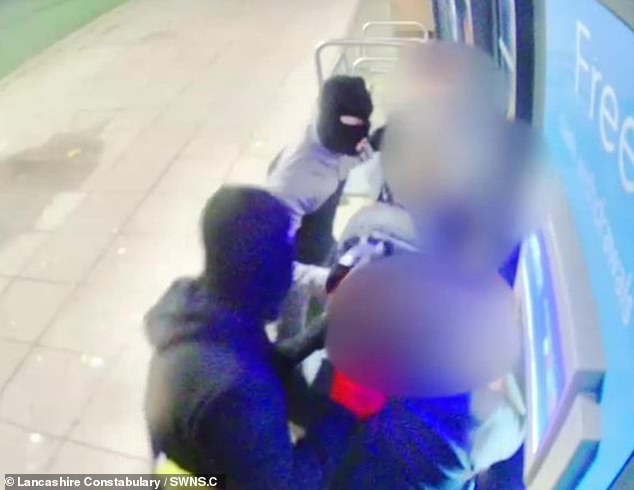 Police said the men (pictured on CCTV) ordered staff to put a significant amount of cash and cigarettes in a duvet cover during the 10:10 p.m. raid on Saturday in Leyland

The thieves then asked staff to reopen the doors and left, forcing workers to walk through a nearby park with them to make sure they didn’t call the police before they could escape.

According to detectives, no staff were injured but they have been subjected to continuous threats of violence.

Lancashire Police appeal for more information on the suspects, describing one as a stocky build, about 6 feet tall and at the time wearing all-black clothing with a black ski mask.

A second suspect is skinny, with blonde hair and distinctive front teeth that are cut to the side.

He was wearing a gray and black two-tone Under Armor top, gray sweatpants with white markings, green sneakers and a black hood. 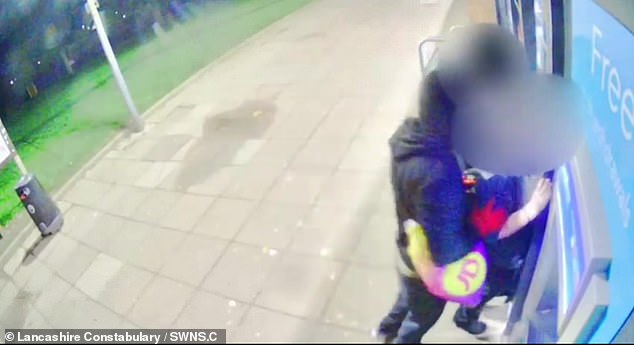 The thieves then left, forcing staff to accompany them to a nearby park to make sure they didn’t call the police. Pictured: CCTV showing thieves forcing staff in

No staff were injured, but they were subjected to constant threats of violence. Lancashire Police are appealing for information on the suspects (one pictured on CCTV) 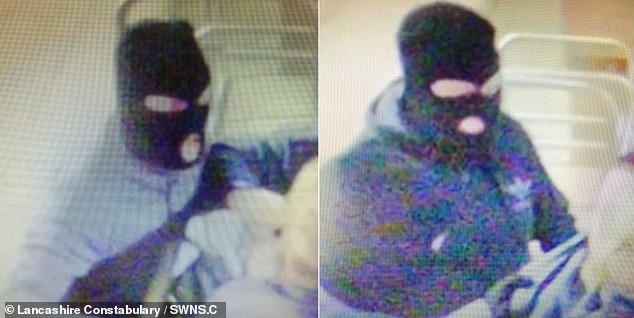 No arrests have yet been made and investigations are ongoing. Pictured: Two of the suspects wearing hoods on CCTV

The third man is of medium build and height and wore all black, including a black Adidas sweatshirt, black gloves and a black hood.

No arrests have yet been made and investigations are ongoing.

Lancashire Police Detection Officer Laura Lawson said: “This is a shocking incident against staff preparing to return home after a hard day’s work.

â€œInstead of being allowed to do so, they were instead subjected to a terrifying theft involving weapons and threats of violence. Fortunately, none of them were injured, but naturally they were left extremely shaken.

â€œWe understand that the public will be rightly appalled by this incident.

â€œWe are now calling on anyone with information or anyone who recognizes the suspects in this case to contact the police as soon as possible.

â€œReinsurance patrols have been stepped up in the region. If you have any concerns or have any information that might aid our investigations, please stop an officer and say hello. ‘