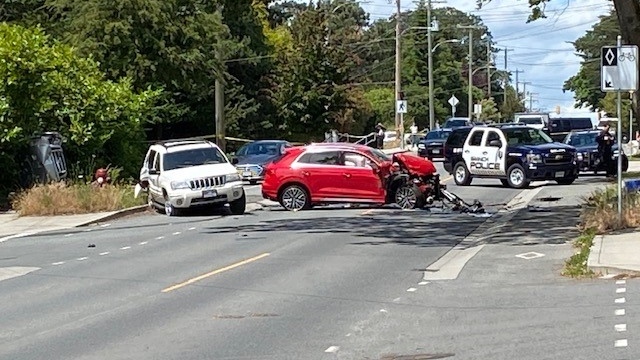 The British Columbia Office of Independent Investigations has cleared Saanich police of wrongdoing after a man was seriously injured in a police-related incident earlier this summer.

On July 7, Saanich police were involved in a tense confrontation with a man on Cook Street near Oakmount Road.

Police could be heard trying to negotiate with the man, who was standing at the scene of an accident behind a badly damaged four-door sedan.

Officers had guns in their hands and were trying to convince the man to drop a knife he was holding, which one witness described as a “butcher’s knife”.

The witness told CTV News the man appeared distraught and cut his neck with the knife, before police shot him.

The man then fell to the ground where he was taken into custody and taken to hospital.

Officers responded with firearms drawn at the scene of a heavily damaged four-door sedan on Cook Street near Oakmount Road on Thursday, July 7, 2022. (CTV News)

In a statement at the time, police said the man had suffered “serious life-threatening injuries,” and BC Emergency Health Services told CTV News that the man was in critical condition.

On Monday, the IIO said it reviewed the incident and concluded the life-threatening injuries were caused by the man and that “only minor injuries” were the result of police actions.

The IIO said witnesses and the man himself told investigators the serious injuries were self-inflicted.

The IIO says it also reviewed video footage and forensic evidence when completing its investigation.

The IIO is the independent civilian oversight body responsible for investigating all police incidents resulting in serious injury or death.