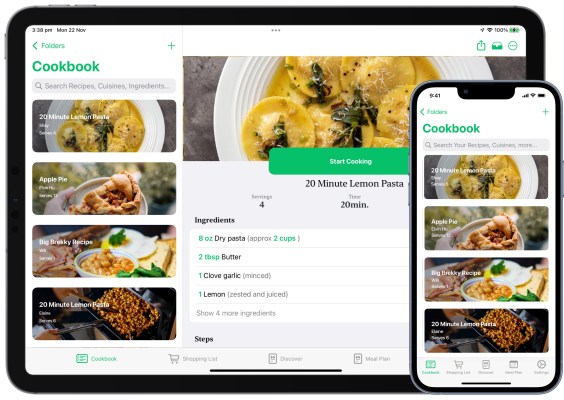 Pestle recipe app helps you organize, plan and cook hands-free or with friends over FaceTime – TechCrunch

A newly launched recipe app called Pestle aims to do more than provide a place to save and organize your favorite recipes. The app, from indie developer Will Bishop, also helps you plan meals, create shopping lists, follow new recipes from creators, and even cook hands-free or with friends and family remotely via the Apple’s SharePlay feature for FaceTime.

The result is a well-built recipe app that provides a better end-user experience, and tries to respect the creator content it curates by offering source links, tools to discover more recipes from the same creator at the as they are published and a feature that encourages repeat visits to recipe sites. But some of Pestle’s other features make it almost too easy to bypass creator websites, which could cause concern.

Like many people who use the web for cooking inspiration, Bishop has become frustrated with the clutter common on today’s recipe websites where you have to scroll all the way down to find recipe steps. real – a format designed to capture more Google search traffic. Like many home chefs, Bishop found himself copying and pasting recipes into Apple’s Notes app so he could annotate them with his own tweaks and tips. This wasn’t the ideal solution, of course, as it involved a lot of manual steps and resulted in a messy system, given that Notes isn’t designed to be a recipe database. So he decided to create his own solution with Pestle.

The app integrates with Safari, so you can save any recipe you find on the web by tapping the “Share” button on your iOS browser, like Safari or Chrome, and then tapping Pestle from the list. applications that appears. The pestle will automatically import the recipe, including the ingredient list and instructions. This is similar to how other popular recipe saving apps work, like Whisk or Paprika, for example.

However, where other apps may highlight the source directly on the recipe page, making it obvious who to credit, Pestle’s attribution link is hidden under its three-dot “more” menu at the top of the recipe page. This is probably not a problem for the end user, who can easily look up the link if they need to refer to the website for more information. But that might cause complaints from the recipe creator, given that it takes an extra tap to access the link and it feels a bit hidden.

Moreover, while competitor Whisk even goes as far as not import a recipe’s instructions – requiring users to visit the recipe site, where they can then choose to copy and paste the instructions into the app for future reference – Pestle automatically imports the instructions alongside the ingredient list and nutritional information. Again, convenience for the end user; less for the creator.

Finally, while premium users can enjoy smart suggestions for new recipes from the recipe sites they like to visit, these can also be browsed and saved without visiting the website.

Bishop, however, says he tried to be careful with the implementation here when it comes to creator content.

“At the end of the day, I think Pestle complements recipe websites instead of just taking it. First, when you share a recipe with Pestle, you have to already be on their page. That means you’ve loaded their ads, that their rankings improve, etc.,” he explains. “The pestle comes down to hitting the print button on recipe websites.”

Plus, he notes, sources are attributed and linked, and the app also prompts you to revisit the website after you finish cooking to leave a review, which is a neat idea in terms of recirculating traffic. from the application to the creator’s original. contents.

“Also, the proceeds are not redistributed en masse,” adds Bishop. “Pestle users can share recipes with each other, but if they share the recipe with someone who doesn’t have Pestle, they’ll just load the original site.”

From an end-user perspective, there are few complaints as Pestle offers an easy-to-use app with lots of useful features. Although you can create your own folders, Pestle will automatically organize recipes for you by category and cuisine, so you can quickly find recipes without having to create your own folder system.

As you cook, you can upgrade to a guided experience where you walk through the recipe step by step. You can also set multiple timers along the way and tap the links on each to remind you of the amounts you need. Many other apps require you to switch between ingredient lists and steps, which can complicate things when recipe steps need to be implemented quickly or hands get messy.

And if you’re worried about getting your screen dirty, you can navigate the app hands-free using voice commands like “Back” and “Forward.” 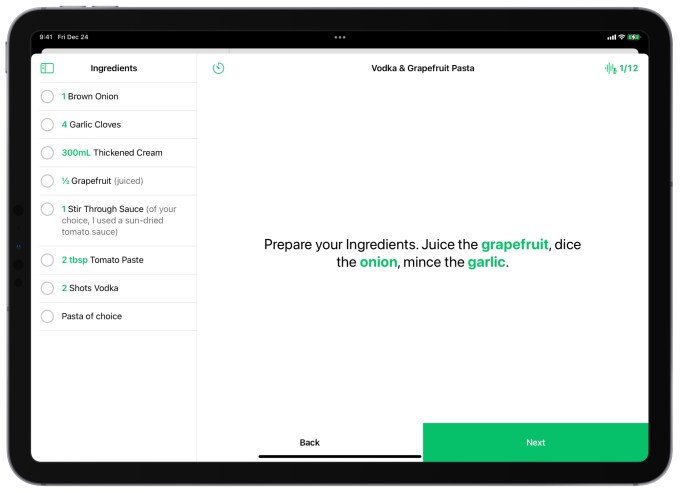 Pestle also supports Apple’s SharePlay, so you can FaceTime call with family or friends and cook together while using the app.

Premium users get access to a few extra features, like the discovery section to find new cooking inspirations, transfer and sync between iPhone and iPad devices, 14-day meal planning assistance, and shopping lists with Apple Reminders integration. (However, it won’t go so far as to help you order ingredients through a shopping site like Instacart).

Bishop, a 19-year-old freelance developer and former WWDC researcher, had created other apps before Pestle, including an Apple Watch Reddit app Nano for Reddit and an Apple Watch Twitter app, Chirp, among others. But Pestle is his main focus as the others are largely self-sufficient.

He would like to bring Pestle to other platforms, but right now that may not be possible as a one-person operation, he says.

Pestle is a free download on the App Store.