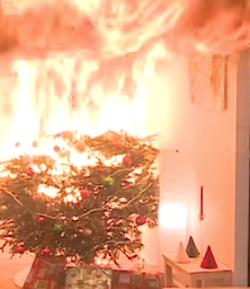 Many features of the holiday season, including Christmas trees, Christmas decorations, cooking and baking, present potential fire hazards that contribute to an annual increase in home fires in the United States during the months winter. According to the National Fire Protection Association (NFPA), Christmas Day and Christmas Eve are among the main days of the year for home fires (only Thanksgiving Day).

â€œDecember is an important month for house fires, in large part because many of the activities we do during the holiday season reflect the main causes of house fires throughout the year,â€ said Lorraine. Carli, Vice President of Outreach and Advocacy at NFPA.

Fortunately, Carli notes, the majority of winter fires can be prevented with a little awareness and planning.

“By knowing where potential fire hazards exist and taking some basic safety precautions to prevent them, people can enjoy a festive, fire-free holiday season,” Carli said.

The NFPA Winter Vacation page offers a wide variety of tips and resources for reducing the risk of fire, while the latest statistics from the NFPA highlight the increased risk of fires during the holiday season:

â€¢ An estimated average of 160 house fires that started when Christmas trees caught fire caused an average of two civilian deaths, 12 civilian injuries and $ 10 million in direct property damage per year between 2015 and 2019.

â€¢ Certain types of electrical distribution or lighting equipment, including decorative light fixtures, were involved in almost half of these fires. Nearly one in five Christmas tree fires has been started by decorative lights.

â€¢ In almost a fifth of Christmas tree fires, the tree was too close to a heat source, such as a candle or heating or lighting equipment.

â€¢ An estimated average of 790 house fires that started when decorations (other than Christmas trees) caught fire caused an average of one civilian death, 26 civilian injuries and $ 13 million in direct property damage per year between 2015 and 2019.

â€¢ One in five interior design fires occurred in December.

â€¢ Throughout the year, 35 percent of interior decoration fires started with candles; in December, the number jumped to 45 percent.

â€¢ In more than two in five (44%) fires involving decorations, the decoration was too close to a heat source such as a candle, cooking or heating equipment.

â€¢ Candle fires peak in December and January with 11% of candle fires in each of these months.

â€¢ In three out of five candle fires, the candle was too close to something that could ignite.

â€¢ Christmas is the peak day for candlelight with around 2.5 times the daily average; Christmas Eve placed second.

â€¢ Falling asleep was a factor in 10 percent of household candle fires and 12 percent of associated deaths.

â€¢ Unattended cooking is the number one cause of home kitchen fires.

Heating equipment fires, the second leading year-round cause of home fires in the United States, peak during the winter months when temperatures drop and more people use heating equipment to keep their house warm. Put a Freeze on Winter Fires, an annual NFPA campaign with the US Fire Administration (USFA), aims to better educate the public on how to stay safe during the colder months, by offering tip sheets and d other resources to help reduce the risk of heating fires and other winter hazards.