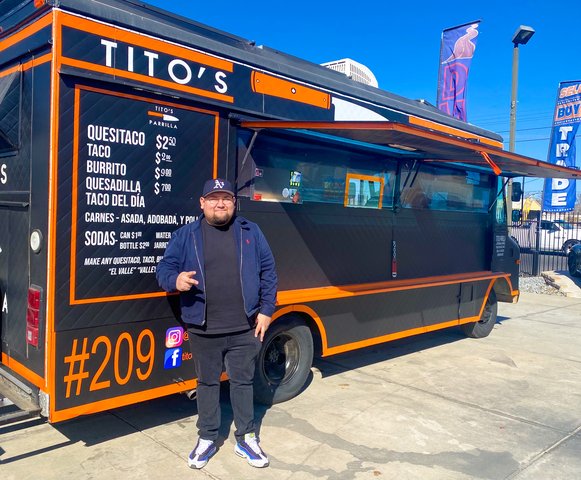 Starting a new business is almost always a steep climb, but Delhi resident Tito Alvarez could never have imagined the trials and tribulations he would face to open Turlock’s new food truck, Tito’s Parrilla, just 26 year.

The truck’s story began two years ago when Alvarez and his father bought a used food truck just before the pandemic hit, and Alvarez planned to use the vehicle to expand his already successful food business. . Many Turlock residents are likely familiar with its cuisine; he has been executive chef of La Mo Cafe since 2018 and has worked at the restaurant since 2015.

“I’ve been cooking since I was 10. Living in a Mexican household, my mom always cooked and my grandma always cooked,” Alvarez said. “That’s why I turned to this, because I saw how even after the toughest day at work, they could come home, make comfort food, and come back to a happy time. .I’ve always loved cooking for people and seeing that moment.”

With support from his other job in La Mo, Alvarez and his father began the process of starting the food truck as the global shutdowns began, from filling out paperwork to getting the vehicle up to code. Then disaster struck when Alvarez and his immediate family contracted COVID-19 in the summer of 2020. Alvarez and his father were hospitalized for a short time and his sister was placed in intensive care.

Although all three had recovered, the troubles weren’t over for Alvarez yet. He received another blow with the tragic death of his cousin just weeks after returning from hospital. Then, after feeling pain for a few weeks after his bout with COVID, doctors told him the virus had left him with a pulmonary embolism and two additional blood clots in his legs.

Alvarez received treatment and medication for his condition, but it’s safe to say that Tito’s Parrilla food truck was suspended as he and his family recovered from a months-long ordeal. Many blessings have been bestowed on Alvarez since then, however, he and his fiancé have married and are expecting twins who will be born this month.

In 2021, plans were underway for Tito’s Parrilla and the truck was well on its way to becoming a reality. In 2022, the new food truck celebrated its official opening on January 4. Alvarez holds the truck with help from his mother, sister, and best friend. After working the mornings at La Mo and preparing the kitchen for the day, he heads to his new business.

“It shows how life can be a roller coaster. It’s been two years of my life invested in this truck, and it’s so much more than a truck for us,” Alvarez said. “It’s living until 2020. It’s the salvation of our family. It is our happiness.

Alvarez’s cooking also brings happiness to the community, and he describes it as his homage to the Turlock taco trucks he’s come to know and love. Tito’s parrilla is a bit different, however – the meats are marinated and charcoal-grilled, the quesitacos offer a mouth-watering, cheesy alternative to street tacos, and customers go crazy for the truck’s “El Valle” offering, which dresses up menu items with all three meats, jalapenos, onions, cilantro, cheese, and a variety of creamy, flavorful salsas.

The truck also offers different special tacos during the week, like birria and mole, and will eventually sell other items like whole chickens and tri tip cooked on a Santa Maria grill.

The support in just a few weeks has been incredible, Alvarez said, making the journey to get there all the more worthwhile.

“It’s unreal to see all the posts on Instagram and all the people who have come to try the food. It’s unreal and there are no words to express what it means,” he said “This is my future for my children and my family.”

The ultimate guide to sustainable food in the city