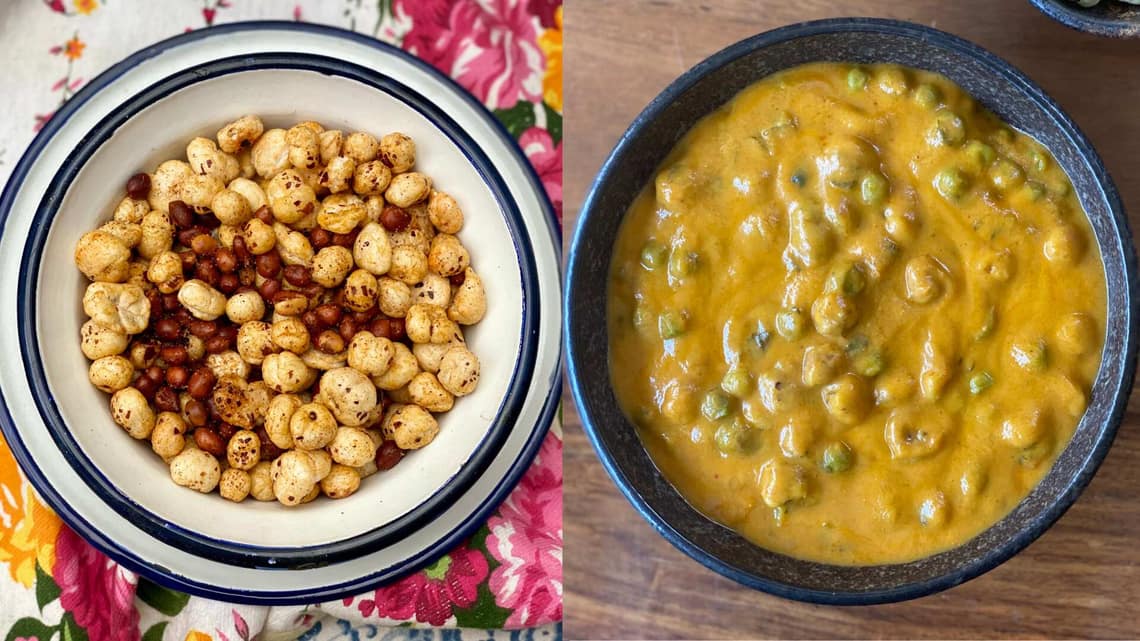 How to use makhana in everyday recipes

In April, I was in the capital for a shoot. We were strolling around Khari Baoli, Asia’s largest wholesale grocery and spice market, located in Old Delhi. Walking through the alleyways, where the air was infused with an intoxicating mix of spice aromas, was a one-of-a-kind experience. The vibrant colors of the lentil, bean, grain, whole and powdered spice varieties were a visual delight.

Among the open-air shops selling lentils and spices was a shop with bags filled with makhana, called fox nuts or gorgon nuts. Since I had just bought half a kilogram of makhana at home in Bengaluru, I was curious to know the price of makhana in a wholesale market. I stopped at the store and chatted with the shopkeeper. He was delighted that I knew that most makhana grown in India came from North Bihar, especially Darbhanga, his home town. The price was around ₹250 per half kilogram in the wholesale store for the same brand name package I paid for ₹400 for in Bangalore. We started talking and he told me that he had worked in Bangalore for two years before deciding to set up the spice shop in Old Delhi, specializing in makhana from his village in Bihar. He was happy that growing makhana had become profitable for people in his hometown due to its growing popularity over the past four to five years as a superfood and healthy snack.

Makhana, much loved, even revered, in the Mithila region of Bihar, has gained recognition throughout India. The term nut is a misnomer, as it is the seed of the prickly water lily. Even today, growing and processing makhana involves intensive manual labor, making it as expensive as almonds, and rightly so.

Supermarket snack aisles are full of roasted makhana snacks in a variety of savory (and even sweet) flavors. Because makhana, a bland ingredient, is a flavor sponge, happy to take on the flavor of whatever spice blend you mix it into. It’s also a healthier substitute for popcorn or puffed rice, given its higher protein, fiber, and mineral content.

The most important tip about cooking with makhana is to take your time and patiently roast it over low heat until it becomes crispy. Not roasting it well enough will leave it uncomfortable, sticking to your teeth and threatening to pull out any expensive dental crowns you may have.

Once roasted, it can be used to prepare makhana kheer, halwa or laddoos. If you don’t like sweet, use it in chivdas similar to those made with puffed rice. Roasted makhana can also be used to make a delicious savory granola with the addition of nuts, seeds and dried fruits. Makhana feels perfectly at home in a pea sauce, its spongy nature soaking up all the flavors of the spices and aromatics in the sauce.

Half a teaspoon of roasted cumin powder

Half a teaspoon of smoked paprika

Half teaspoon of red chilli powder

Heat the ghee in a heavy-bottomed saucepan. Fry the peanuts over medium heat for four to five minutes, until golden and crispy. Remove the fried peanuts with a slotted spoon and set aside.

Add the makhana to the remaining ghee in the pan and roast over medium heat for seven to eight minutes until crispy. Lower the heat and add the ground cumin, smoked paprika and ground chilli. Season with salt. Return the fried peanuts to the skillet. Mix all the ingredients over low heat for one to two minutes until the spices coat the makhana, taking care not to burn the spices.

Remove to a bowl and let cool completely to crisp it up. Serve immediately or put in an airtight jar. Best consumed within three to four days.

Half cup of milk

Half teaspoon of turmeric powder

Half teaspoon of garam masala powder

In a heavy-bottomed saucepan, heat 2 teaspoons of ghee. Roast the makhana for seven to eight minutes over low heat until crispy. Set aside. Cook frozen peas in a saucepan or bowl in the microwave for three to four minutes until tender. Drain and set aside.

In a pressure cooker or pressure cooker, heat 1 tablespoon of ghee. Brown all the spices (bay leaf, clove, cinnamon, cardamom) over high heat for a few seconds. Add chopped onions and tomatoes, garlic and ginger. Sauté for two to three minutes over medium heat. Finally, add the cashews and milk to the pressure cooker. Salt and close the lid of the pressure cooker. Pressure cook for five to seven minutes (hold the simulation for five to seven minutes after a whistle). Open the slow cooker and allow its contents to cool. Remove bay leaf, cloves and cinnamon stick and discard. Blend the rest of the cooked ingredients into a fine puree using up to a cup of water.

Transfer this puree to a saucepan. Mix cooked peas and roasted makhana into the sauce. Add the red chili powder, turmeric powder and garam masala and bring to a boil over low heat. Cover and cook for five to seven minutes until the makhana is softened. Finish with crushed kasoori methi. Serve hot with parathas or rotis.

Double Tested is a bi-monthly column on vegetarian cooking, highlighting a single ingredient prepared two ways. Nandita Iyer is the author of the recently published book This Handmade Life—7 Skills To Enhance And Transform Your Everyday Life. @saffrontrail on Twitter and Instagram.

Read also | Easy to cook, masoor is your go-to

International Falafel Day 2022: easy and delicious recipe to enjoy falafel on this day (watch the video)