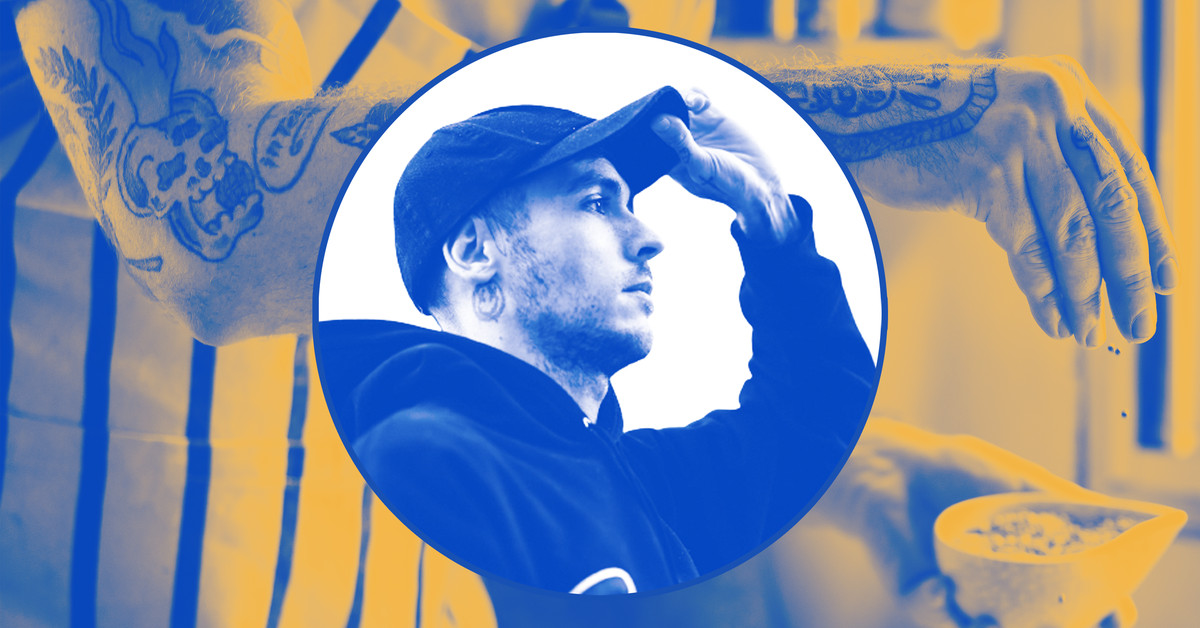 In How I got my job, people from across the food and restaurant industry answer Eater’s questions about, well, how they got their jobs. Today’s episode: Brandon Skier.

If Brandon Skier knew he was going to be famous on TikTok, he certainly wouldn’t have chosen @sad_papi as his handle forever. “The name was a joke,” he admits, a play on Drake’s nickname @champagnepapi. “I created my account to pass the time. I never intended it to be my brand, but I started growing and that was it. The handle is stuck.

With zero technical skills and a decade of restaurant experience under his belt, the former line cook and Los Angeles native entered the world of social media as a last resort. He had lost his restaurant job when the pandemic hit and was unable to find another in the spring of 2020 as restaurants across the city were forced to close. But Skier didn’t want to give up his lifelong passion for food, so he started posting cooking videos on TikTok.

Nearly two years later, Skier has amassed 1.9 million followers (affectionately nicknamed his papitas). His tasting menu-style dishes, relaxed approach, and tattooed aesthetic set him apart from competitors on the platform and have earned him partnerships with brands like Hedley & Bennett, East Fork, and Made In. Needless to say, he no longer intends to seek another position as a line cook. In the following interview, Skier shares her take on culinary school, her daily routine, and the key to staying relevant.

Eater: What did you originally want to do when you started your career?

Brandon Skier: My dad was a cook and was paying for college and my grandfather was a baker so I was just surrounded by food since I was a kid. My plan has always been to go into gastronomy and open a restaurant. I grew up watching original Japanese iron boss and Gordon Ramsay, so that’s all I ever wanted to do.

What was your first job? What did that entail?

When I was 15, I got a work permit and started restoring vintage cars. Someone took me on as an apprentice. I worked my way up to become a parts and production manager for a body shop, and was making a decent living for a young teenager. There were some nice perks, but I was behind a desk all the time and didn’t want that. I wanted to be in the restaurant business, so I quit and took a job frying for minimum wage.

How did you get into the industry?

I’ve always had big aspirations for the kitchen, but when I wanted to move into the restaurant business, I knew I wouldn’t be hired at a fine dining establishment. So I watched Jonathan Gold’s 101 [Best Restaurants] List [in the LA Times]. I chose the restaurants that seemed reachable to me at the moment and started sending applications.

I would come in and say, “I don’t have any experience, but I want to learn,” and they would say, “No thanks. We need someone with at least two years of experience. Eventually, I was hired at Plan Check, an American-Japanese fusion restaurant owned by Ernesto Uchimura. I stayed there for a year and then went to Superba Food + Bread which was opened by this great group of chefs.

I stayed there for two years and then went to the Redbird, with chef Neal Fraser, for three years. While I was at Redbird, my friend was Sous Chef at Providence, and I went there all the time and worked on my days off. From there, I went on the opening team at Auburn and stayed there until closing day.

Did you go to culinary school or college? Would you recommend it?

I kind of did it backwards. I started working in the restaurant business for about three years and then went to cooking school at the Art Institute in Hollywood. I was already working in restaurants and growing up with cooks so I felt like I didn’t get as much out of it [culinary school] like I thought I was going to. And I have a mountain of student debt.

If you don’t know the basics, like basic cooking terminology and techniques, then culinary school will be worth it. If you already have fair trade cooking chops, I’d say it’s probably not worth it. It is very expensive for the salary you will receive afterwards.

When did you first feel success?

The first time I had success was the first time I had an item on the menu at Redbird. Chef Neal was super cool and if you thought you had something good you could do it [for the staff]. He would share his criticisms and comments with you. If he really liked it, he would put it on the menu. [My first dish] was a beet salad with whipped goat cheese, sudachi, pistachios and pistachio oil. All toppings also came from our garden.

What was the turning point that led you to where you are now?

COVID hit and the restaurant I worked at, Auburn, closed permanently. It was a new fine dining restaurant, we just didn’t have the money to stay open and weren’t equipped for take out food so they closed. I was trying to look for another job and no one was hiring. Restaurants were closing left and right. Nobody really knew what the restaurant industry would look like.

I had downloaded TikTok just to pass the time and I kept seeing cooking videos. I was like, “I can do this.” So I just posted a video and said, “Hey, I’m a cook. If I started posting cooking videos, would anyone be interested in watching? And I think that video got over a million views in one day, so I just started posting short little videos of recipes and cooking tips from a restaurant worker and it just blew up . It was just for fun and I was doing it until I found another job in a restaurant.

The turning point for me was when four or five big creators on social media [including @acooknamedmatt, @sulheejessica, and Skier’s now-girlfriend @veggiekins] messaged me asking if I had considered doing this full time. They gave me tips on how to improve my camera and told me that I didn’t really need to go back to restaurants to make a living.

A lot of people were telling me the same thing at the same time, so I took the plunge. I took all my money – I was unemployed at the time – and bought a camera. I didn’t even have a laptop, so I bought a laptop and downloaded some editing software and taught myself how to edit and shoot. I never looked back. I am here.

What does your job entail? What’s your favorite part about it?

I wake up and, much like a restaurant, work on a makeshift prep list, but that’s my content schedule. I have a whiteboard and I write down all the things I’m going to work on – all the things I’m doing R&D on, what I have to shoot that day, what needs to be edited – and then I’ll see if there is any overlap and if I can work on more than one thing at a time.

I’ll do a grocery run if necessary, come back, settle in and start my plans. It will last for hours. In the meantime, I’m probably answering emails or text messages from my manager. When I’m done filming, I’ll start editing, then I’ll put the finishing touches on it. Then I’ll respond to a slew of emails and I’m pretty much glued to the computer for a while.

Then I’ll upload – I try to post every day on TikTok, Instagram and YouTube – and engage. I used to reply to almost every comment I received. Now that’s just not doable – there are just too many. I set aside about an hour a day to respond to comments and DMs. Then I’ll put my phone away, cook dinner, and review my list toward the end of the night.

Which social media platform do you focus on? Why?

If you are looking to create a platform and grow very quickly, TikTok is the best for that. Instagram is best for monetization, if you want to do brand partnerships, and it pays a little more through the creative fund [Meta] has established [to compensate content creators directly], as well as. YouTube is also good at taking care of its creators.

What would surprise people in your work?

Probably hours. People think content creators just cook something, film it, and post it, like it’s a fun time. I hadn’t realized how much work there was. As a line cook, I held two jobs for a long time and work pretty much the exact same hours.

I do something all the time. Everything I do is work related in one way or another, but I mostly do it at home, I feel comfortable most of the time and I can choose what I work on.

What advice would you give to someone who wants your job?

First, find your niche. There’s a lot of food content out there, and if you just jump on every trend and do generic stuff, you’re going to disappear just like the trend will. Find out what your niche is, stick to it, and be yourself. People are going to appreciate someone who is authentic rather than someone who just makes baked feta pasta.

This interview has been edited and condensed for clarity.

Morgan Goldberg is a freelance writer based in Los Angeles.