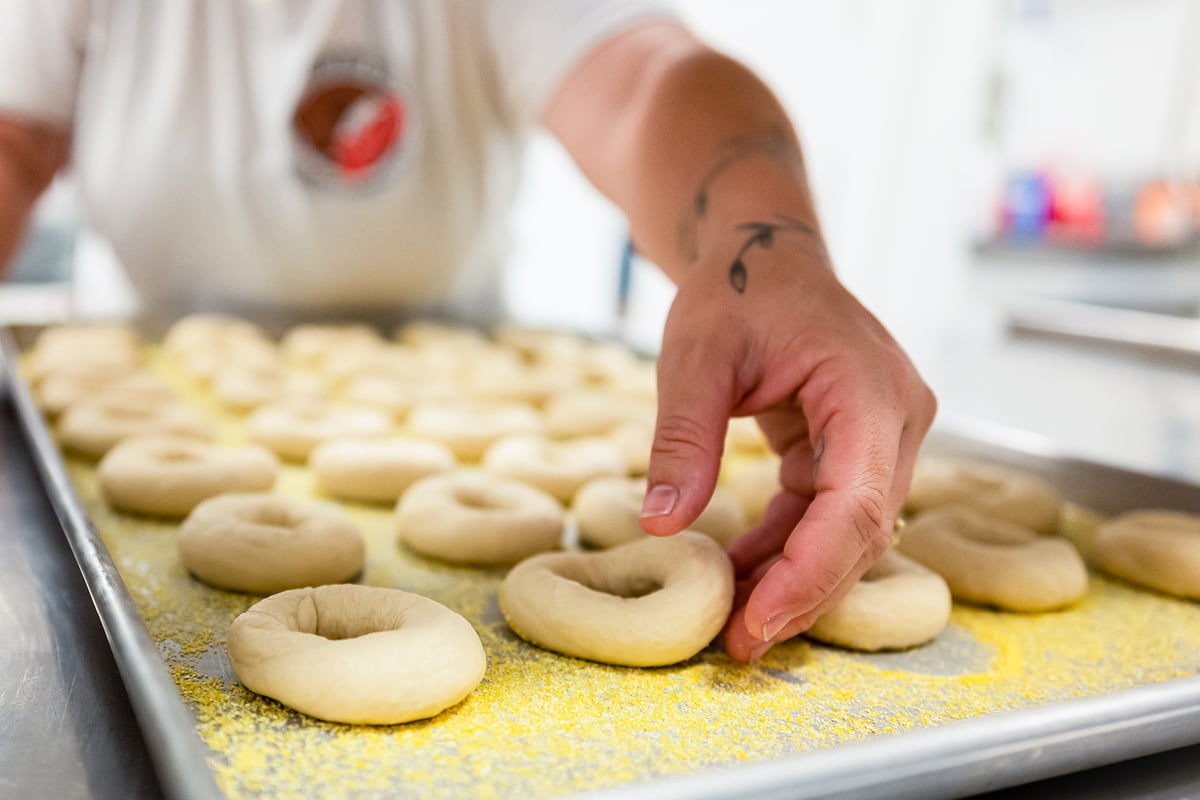 Iit’s just after 8am on a thursday in downtown Honolulu, and Kelly Bongolan, already three hours into her shift, is heating up 28 gallons of milk in a tilting pan – basically, a giant saucepan. A pot of ultraviolet yams is bubbling on the six-burner stove beside her. She adds white vinegar to the milk, and it begins to curdle into the cream cheese she is looking for. It will be a week of schmear.

His partner, Talia Schwartz, takes care of the dishes throughout the kitchen, scrubbing a quick rack of baking sheets and cedar planks used to bake more than 300 miniature bagels. Bongolan and Schwartz are the duo behind Tali’s Bagels, a popular new vendor at weekend FarmLovers farmers markets in Kaka’ako and Kailua.

“When we started, it was all at home on our stovetop,” says Schwartz. “Boil the bagels, make the cream cheese, prepare the flavors for the schmears. At one point we even considered not going to the market because we couldn’t make enough cream cheese.

Pass the towering columns that face Harbor Court to find the local Hana Kitchens Hawai’i outpost, a commissary kitchen and culinary incubator. Among the tidy resorts and gleaming high-end amenities is a tight-knit community of budding food entrepreneurs in need of commercial kitchen facilities. There are less than a dozen licensed food preparation facilities on O’ahu, according to estimates by the Hawaii Department of Health. Hana Kitchens stands out for its broad vision to not only help small business owners prepare food, but also to market and present that food to the public through pop-up events, tastings and cooking classes. With this, it incubates the city’s next generation of restaurateurs and chefs, providing a support system to make the island’s culinary options all the more diverse and delicious.

Hana Kitchens opened in July 2021, with Banán and The Local General Store among its first tenants. Since then, the facility has become a base for 20 local food businesses. The monthly calendar reads like a “best of” list, ranging from established Banán to rising stars Milk Market Hawai’i and Tali’s Bagels. If you frequent the local farmers’ markets, chances are you’ll recognize the people who work here, many of whom stay late into the night. Despite grueling hours, the energy and dreams that vibrate in this unique space feel more like a coworking center than your average industrial commercial kitchen.

Manufacturers have the unique ability to tailor their operating and storage spaces to the needs of their business. Rates are around $200 for an eight-hour shift, and if manufacturers book additional eight-hour shifts during the week, they benefit from cooler, drier storage. They also have 24-hour access and can reserve “baker” time slots to prepare their produce in the wee hours before the morning farmers’ markets.

Down the hall from the central kitchen, the local general store has a dedicated cold prep kitchen with a walk-in refrigerator large enough to store whole animals and with space for butchering and baking. “We looked at various communal kitchens, but they lacked storage space for what we needed,” says Harley Tunac Chow, co-owner of the business, which sells artisan pastries and locally raised meats. “One of the kitchens couldn’t even offer us a cold room because everything was full.”

In its designated area, Tunac Chow laminates blocks of cold butter with sheets of dough that will become airy croissants and pastries for the weekend markets. Her husband and partner, Jason Chow, breaks down a side of beef from Griffith Livestock in Wai’anae on another corner. They’ll be here for a few more hours, returning Friday night to bake in the morning before packing for their stall at the KCC Farmer’s Market.

Jby DiCondina, a New York real estate agent who grew up in the hospitality industry, runs Hana Kitchens. His father ran his family’s Italian restaurants in New York and New Jersey, as well as a hotel in Italy passed down from generation to generation. “I understood very early on that if I wanted to see my father, I had to go and work with him”, explains Di Condina. “So at 12 I started as a water boy and climbed almost every position in a restaurant, both front and back of the house. The truth is that I love restaurants and catering services; I really feel in my element and [in] a state of flux.

Hana Kitchens provides enough space for its producers to work side by side in a common kitchen. Photo: Aaron K. Yoshino

Although he understood the allure and benefits of owning and running a restaurant, the stressful life of a restaurateur was not for him. “I knew opening a restaurant wasn’t the right thing to do if I wanted to start a family,” says Di Condina, who moved to Honolulu with his wife in 2017. “After seeing what the industry of the restoration did to my father, and his quality of life…”

Instead, he and his business partner, Honolulu-born chef Michael Hu, empower others to fulfill their dreams of starting or expanding their businesses.

In 2006, after his pastry career at New York’s Waldorf-Astoria ended, he stayed in town and founded Hana Pastries. He started wholesale desserts at the Grand Hyatt in Manhattan and All Nippon Airways and eventually expanded to California. And it has contracted with Whole Foods to produce a line of gluten-free desserts. Business was steady until 2008 when the Great Recession cast its shadow over the economy.

“After doing a few events that weren’t so good, I realized it was time to drop the baking business,” Hu says. He went from baking to subletting his space to caterers and food startups and quickly found success. This prompted him to convert Hana’s locations in Brooklyn and Huntington Beach into police station kitchens, then expand to Austin, Texas.

Around this time, Hu and Di Condina connected through a mutual lawyer in New York after discovering their shared passion for food and their ties to Hawai’i (Di Condina’s wife, Naomi, is originally from Honolulu). They teamed up to bring Hana Kitchens to the islands, launching a commercial kitchen that was more than just a space with equipment.

For three and a half years, Hu and Di Condina searched for the perfect facility, visiting numerous sites in Kaka’ako and Iwilei. At the end of 2020, their broker suggested a third floor space at Harbor Court. The 14,000 square foot banquet restaurant released by Japanese company Watabe Wedding Corp. had exactly what they were looking for: high-powered ventilation hoods, a grease trap, flexible dining areas ready for renovation, and a central business and retail location. operations.

“I’ve always wanted to build an open kitchen in this facility,” says Di Condina, who is now the sole owner of Hana Kitchens Hawai’i. “But I also found that local food producers and entrepreneurs needed space to work and start their business. What sets us apart is that we screen every manufacturer and company that wants to work here. We want to be as excited about the products they make as they are.

When evaluating potential producers, Di Condina takes into account the quality of the products, the quantity of local supply and the passion of the manufacturers. He says he wants to find “the right attitude and motivation for their brand to succeed. I’m all about the culture in the kitchen and we’re a shared kitchen, so people have to get along and work alongside each other and be willing to collaborate and promote each other. 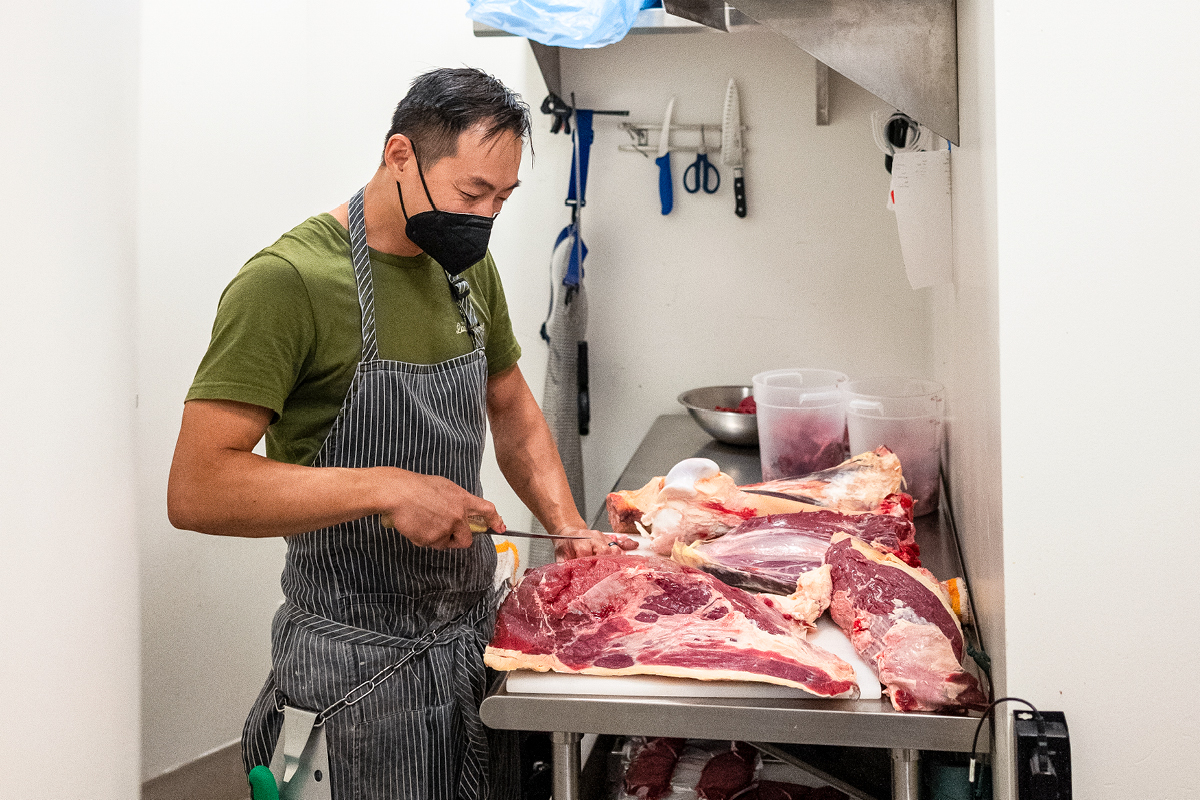 Jason Chow of The Local General Store prefers to take one cow, pig or lamb at a time each day. Photo: Aaron K. Yoshino

For some tenants, Hana Kitchens fully meets their needs. For others, like the Chows at The Local General Store, it’s just one step closer to falling back into the unknown. “We didn’t think it would be so difficult to find a brick and mortar,” says Jason Chow. “Due to the pandemic, many large restaurants are also reducing their workforce. They take all the dining spaces in the size we need. Owners are obviously going to go for established restaurants and not a new business like us. »

With the lack of turnkey restaurants available for rent in Honolulu, the Chows rewrite their business plan to include building a full kitchen, from the ground up. “It’s a lot of money, a lot of money that we don’t have,” Chow said. “In the meantime, Hana Kitchens is perfect for us because we don’t have to invest that money right away or apply for a loan. They have the necessary equipment like walk-ins and grease traps, basically everything we need in a fully functional kitchen.

Construction of the second phase of Hana Kitchens began shortly after a 40-foot container full of cooking equipment and building materials arrived from New York in late February. In the fall of this year, Hana Kitchens will have added two self-contained kitchens with their own separate hoods, grease traps and sinks; an additional walk-in refrigerator; a dry storage room; and a second multi-station shared kitchen. The final phase of Hana Kitchens’ plan outlines a bar or cafe space on the Diamond Head side of the facility that could accommodate baristas in the morning and mixologists in the evening.

The centerpiece of the open kitchen, defined by a towering 20-foot chef’s table, was designed and manufactured in Brooklyn. Di Condina says it can be used for cooking classes and can be set up for photo and video studio shooting. In February, Hana Kitchens held its first retail pop-ups with Weirdoughs Focaccia. In April, Onda Pasta’s Andrea Onetti, although not a tenant of Hana Kitchens, hosted two four-hour pasta-making classes that ended with dinner and wine tastings.

On Wednesdays, Schwartz and Bongolan set up their mini bagel flights and pots of schmears in the lobby overlooking Honolulu Harbor. In the two weeks since the launch of this pop-up, their sales volume began to rival the demand of each weekend market – 400 to 500 mini bagels.

“Hana Kitchens helped us make Tali’s Bagels a reality,” says Schwartz. “The space and equipment allows us to scale quickly, but having Joe as a mentor to guide us has really changed the course of our future, and many others, for the better.”