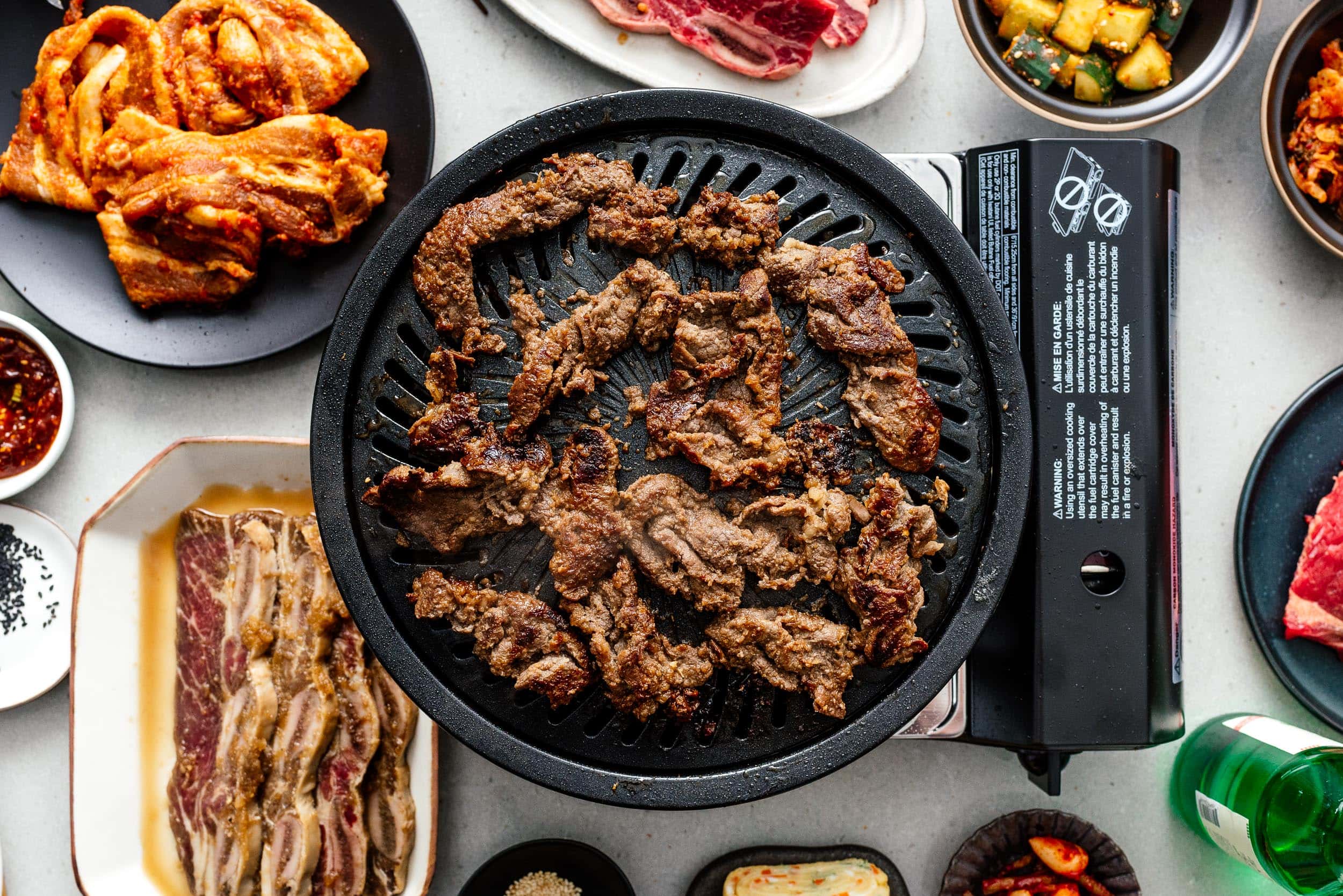 From fried chicken to tteok-bokki: the ultimate guide to Korean cuisine in Cairo


From fried chicken to tteok-bokki: the ultimate guide to Korean cuisine in Cairo

Korean culture has made a noticeable buzz in Cairo over the past few years, with particular focus on its food scene. Culturally driven food connoisseurs often find themselves in Korean restaurants, curious to try something new.

Korean restaurants have been around in Egypt for quite some time now, especially in culturally diverse areas like Maadi and Zamalek. They are often small and tucked away, but when you walk in it’s a whole different world.

Egypt and Korea have been linked for years, with celebrations like “Korean Culture Week” and Korean culture catapulting young Egyptians to study the language at universities. The list of culture admirers grew further in Egypt with the film “Parasite” which won the Oscar for best film in 2019, drawing attention to Korean cinema and media beyond die-hard fans of K-Pop and K-Drama that preceded the wave. The spotlight hit Korean showbusiness again when popular boy group BTS performed at the 2021 Grammys and when the hit show ‘Squid Game’ aired on Netflix in 2021.

In 2020, Egypt recorded the fastest growth rate in terms of Korean music consumption, which garnered 33% of streams on Spotify.

As interest in K-Pop and K-Drama peaked recently, fans became curious to try foods they recognized in these media, such as “Tteok-bokki”, rice cakes Korean rolls often eaten as a snack, and Kimbap, similar to sushi rolls. . With this in mind, many fans started visiting the various food outlets that had been around for years, making them more popular.

In Cairo, if it’s authentic international food you’re looking for, then Maadi or Zamalek are usually the places to go. This is true for most Korean food and barbecue hotspots in the city.

Perhaps the most coveted place for Korean food in Cairo would be Gaya, a Korean BBQ deep in Maadi on Street 231. The atmosphere is true to the culture, with their main attraction being the stylish round table family with a grill that is right on the money.

When it comes to their food, Gaya serves everything from “Tteok-bokki,” to several pieces of meat for the grill, to black bean noodles. Upon entering Gaya, one can find curious Egyptians looking for a culinary adventure, foreigners and expats, as well as Korean staff who are very helpful when it comes to choosing dishes.

Much like Gaya, Tomato Korean BBQ is a great place to go for an authentic meal. Their “Jigae” – a Korean stew with protein, noodles and a broth flavored with Korean red chili paste “Gochujang” – is loved by many Korean food lovers in Cairo.

They serve a variety of meats like brisket and steak, which customers can grill themselves, and enjoy with a variety of side dishes like cucumber salad, potato salad, kimchi – which is a popular fermented cabbage dish – and lettuce leaves used as bread to accompany meat and sides.

Near Degla is “Kokio”: a fried chicken restaurant that serves authentic Korean fried chicken with a variety of sauces: creamy, honey, soy sauce and spicy. They also serve ‘Tteok-bokki’ and fried potatoes with seaweed and Kimbap.

Kokio is well known for its rooster alarm that rings when the order is ready and its walls adorned with photos of previous visitors, with heartfelt messages of their experiences there.

If dinner and Zamalek seem like a better combination, then Hanna’s BBQ is also a recommended spot. This hole in the wall is a hidden gem in the middle of Zamalek, just opposite the Picasso Art Gallery.

The restaurant, although small and dimly lit, offers an enjoyable experience for all the senses, be it the music, decor or food.

Another hidden gem is the Korean cafe “Namuen”, also known as “Namu”, in Heliopolis, which doubles as a cultural center. This is the place where all visual learners can learn while enjoying an authentic Korean meal, coffee or dessert. It’s also ideal for anyone working remotely to sit back, enjoy a different atmosphere, and focus on their work.

As Korean culture continues to become a big part of the modern Egyptian fascination, the Korean food scene continues to thrive in Egypt, from hole-in-the-wall spots to pop-up restaurants.

Suffolk woman wants to pay on behalf of her late brother – WAVY.com