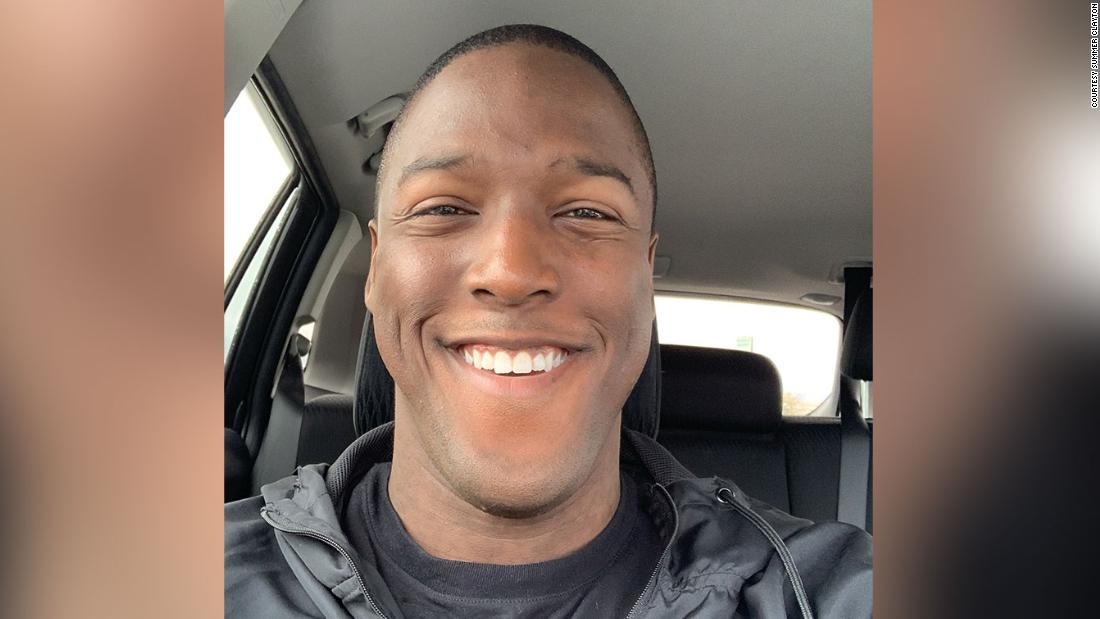 Father’s Day: Summer Clayton is a “proud dad” of 3 million people on TikTok

He pauses, giving time for an answer.

“OK…I see you. That’s really cool….I would definitely celebrate! OK, what was the challenge you had to overcome today?” he asks.

“Well, I’m sorry you had to go through that,” he continues. “But I hope you keep telling people how you feel. I love you, I love you. Let’s eat!”

Clayton, a civilian trainer at Columbus Air Force Base in northeast Mississippi, is neither a therapist nor a life coach. He is only 26 years old and has no children.

To some, his one-sided conversations may seem silly. But his compassion and charisma shine through in the TikTok videos, which have struck a chord with people who need a father figure – or just someone who seems to listen to their issues.

“There are a lot of good memories that I draw from in my childhood, but there are also these deficits that I don’t want other people to know about, whether it’s the feeling of sitting alone in the schoolyard when I was younger or just not having that relationship with my dad that I wanted,” Clayton says of his approach to the videos.

“It lets me practice what it means to be non-judgmental and kind.”

Clayton is a health enthusiast who holds a bachelor’s degree in corporate fitness and a master’s degree in kinesiology. When he’s not working on the base or making his videos, he loves lifting weights, taking photos and cooking.

He started posting on TikTok in late 2020 with inspirational and how-to videos, prompting followers to jokingly call him “dad”. His first video to go viral was a shaving tutorial — a response to a follower who messaged him asking, “Hey daddy, can you teach me how to shave?”

The video exploded, earning him tens of thousands of new fans within hours.

Now he goes by the name “yourprouddad” on TikTok and Instagram, where he has an additional 68,000 followers.

“I really could have been called ‘your proud brother’ or ‘your uncle’ or something like that. I think ‘your proud dad’ stuck around because one of my followers commented on one of my messages and said, ‘Hey, dad,’ he said. “And I said, ‘Well, I guess I’m playing that role.

From there, his videos morphed into various recurring series, including his popular “Dinner With Dad,” in which Clayton sets down two plates of food — one for himself and one for his virtual “child.” With a big smile, he quickly details what’s on the plate. Sometimes he blesses the food. Other times, he gets involved. Almost always, he asks, “How was your day?”

Clayton is part of a growing group of surrogate fathers online, including Rob Kenney of “Dad, How Do I?” Bo Petterson’s YouTube series and DadAdviceFromBo on TikTok, which provide fatherly advice, how-to, moral support and dad jokes.
In a recent video, Clayton discussed the school shooting in Uvalde, Texas. His characteristic smile was gone. There was also no plate.

“Hey, you know, today is a bit of a sad day for a lot of people. A lot of people are waking up without a family member,” he said. “It’s okay to be sad…I just wanted to say that. I love you all, okay? Hope you have a great day today.”

While Clayton works to establish a better relationship with his own father, it hasn’t always been so, he says. He tries to show his followers unconditional love and ask them questions he wished someone would ask him when he was younger.

“When you look at my content, maybe you can think back to how you were treated and you can say, ‘I want better for my kids or for me,'” he says. “And maybe that bit of empathy or reflection can make you a better person for someone else.

Fans say his videos fill a real need in the world

Clayton’s extended family comes from all ages. Many of his “kids” are old enough to be his parents – something he says doesn’t bother him.

“Advice is advice, whether you get it from an older person or a younger person,” Clayton says. “There are younger people that I completely look up to. I’m like, ‘Man, you’re wise beyond your age. I’d love to take some of your advice.'”

Clayton’s youth doesn’t seem to bother many of his fans either.

At 58, Sarah D’Imperio may not seem like Clayton’s target audience. But the New York woman thinks it speaks to the scale of her videos’ appeal.

“It’s a great idea…especially for young men or women of color who may not have a father role model who listens or has time to listen,” she says. “It’s just heartwarming to see someone trying to fill a small part of that role for anyone.”

Jess Brunelle of Portland, Oregon says Clayton’s messages resonate because they address a real need in the world.

“I’m a mental health therapist myself and specialize in multigenerational trauma. … There’s so much trauma in the world and there’s so many people who don’t have a family system or even an adult who has his back,” says Brunelle, 47.

“I know so many adults who are still trying to figure out how to navigate a healthy adult relationship without even knowing what it looks like.”

Moreover, she says, “This world often seems so negative, divided and ugly… Its content is so simple, sweet and positive.”

“I love its content because it forces you to pause and answer these questions for yourself,” says Harvey, 40. “I sincerely answer his questions and smile at his answers.”

Bogar Lopez, 33, of Fullerton, Calif., came across Clayton’s account two months ago. Now he gets notifications to make sure he doesn’t miss any future messages. Lopez has a 16-year-old daughter, and he started asking her the same questions Clayton asks.

“His videos almost always make me cry,” Lopez says. “And it’s not because I have a bad relationship with my dad. I can really see that he’s an amazing person. Every time he posts a video and talks to us, he has one-on-one, asking questions and listening to us, I feel like he’s right in front of me, he cares about me.”

He struggles with anything he can do to help people

As his audience grows, Clayton says he finds it difficult to want to help people as much as he can.

Recently, he said his inbox had around 3,000 direct messages from subscribers telling him about their lives and asking for advice – fatherly and otherwise – on a range of issues, from hygiene to how to handle a breakup. .

Many messages come from young people who don’t have a supportive parent figure in their lives, he says.

Clayton says he tries to respond to as many messages as possible. But he says he also had to learn not to take too much.

“It was hard to let go of that thought that I had to be there for everyone,” he says. “As these messages come in, there’s not enough time in the day to access them. And it tore me apart at first, because sometimes I would get… these heavy messages and I was like, ‘Man, and if I miss someone or something?’

“It took a few conversations with therapists and close friends for me to realize that first of all, I’m blessed to have this. But as much as I wish I could…I can’t be there for the whole world. I can barely be there for myself sometimes.”

Clayton, who wants to have a child of his own one day, also recognizes that the responsibilities of a virtual father figure don’t come close to those of a real father.

“I can never replace someone’s real biological father or fill that void, but maybe throughout my content I can create just a little snapshot (of a father figure) and allow him to have a bit of a choice,” he said.

And provide her digital children with emotional support. And life skills. And a virtual meal.

And what about the extra plate of food? As soon as the video is over, most of the time he devours it.

The One Show’s Alex Jones Slips On ‘Difficult’ A-List Guest, Admits ‘He Just Didn’t Get It’