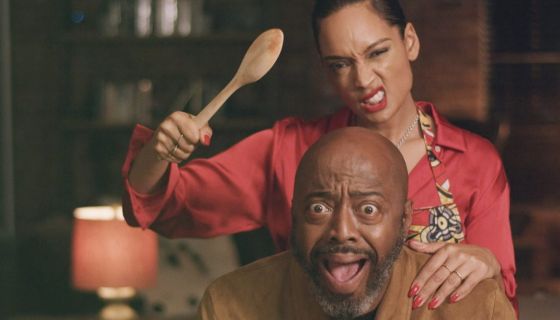 episode three of MADAMENORYit’s The Black Vegan Cooking Show has officially dropped and in this episode, chef Charlise Rookwood laughs it off in the kitchen with comedian and “vegan skeptic” Donnell Rawlings.

The Comedy Central star kept fans laughing as he played Ashy Larry on Chappelle’s Show for three seasons. Rawlings’ slapstick humor has been featured on popular shows like Guycode from MTV and Thread. This week, the Washington, DC native joined Rookwood to cook up a delicious vegan take on ackee and saltfish, a breakfast dish that originated in Jamaica.

Rookwood tells Rawlings how to give it a savory take on the Caribbean classic, using hearts of palm marinated in a savory mix of nori and sea kelp to replace the salt cod. The famous black vegan chef also adds garlic, onions, ginger and a little sea moss to bind the dish. Let’s see if she can turn Rawlings into a vegan believer by the end of the show.

Bon appetit and don’t forget to tune in to the Black Vegan Cooking Show to learn more about the best vegan kitchens and follow chef Charlise Rookwood on social media @VeganSoulicious for more delicious content.

RELATED CONTENT: The Black Vegan Cooking Show Episode 2: Boost Your Libido With THESE Vegan Aphrodisiac Dishes From Queen Of Green