‘Baby Shark’ cooked on BBQ in viral video, turns out to be Brinjal

Although often the subject of horror movies, sharks are actually endangered, with many species threatened with extinction.

That’s why, when a netizen posted a video of himself cooking a “baby shark” on a barbecue, some netizens may have been momentarily surprised.

However, their shock would have quickly given way to amazement at the very masterfully carved sculpture.

The short clip on Douyin, the Chinese version of TikTok, showed what appeared to be a small shark with a pierced stick in its mouth.

It was then rolled from side to side on a grill with smoldering coals, as if being slowly barbecued.

* Cue that boring but catchy barbecue song that’s been all over the internet lately. *

Chilli powder was sprinkled on the poor “fish” for good measure.

In the caption, OP Wang Kang said, “When you’ve had enough of the backbiting in the outside world, come back to me and I’ll grill you a ‘shark’ to eat.”

Although the clip was only 6 seconds long, it went viral with 1.2 million likes and over 111,000 comments.

One of the netizens who commented, perhaps horrified, said he had lost his appetite.

The “baby shark” is actually eggplant

However, most netizens have managed to figure out that the “baby shark” was actually an eggplant carved into the shape of a shark, with some taking care to enlighten those who might still be confused.

A clue would have been the light green color of the “shark’s” belly. 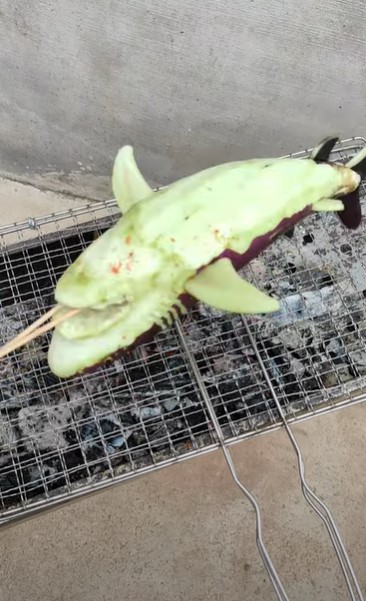 Whoever sculpted it did a good job not only mimicking the shape of a shark, but also cutting out ‘gills’ and ‘fins’. 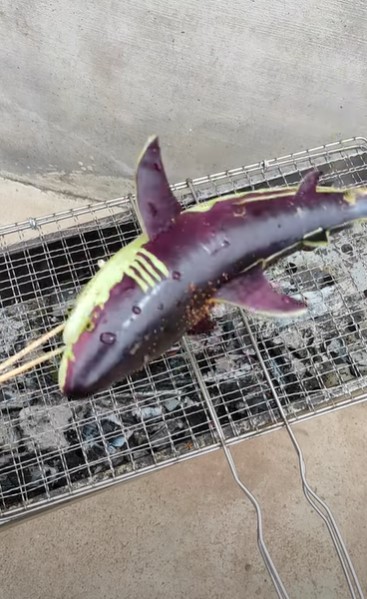 Unsurprisingly, many netizens were amazed by the sculptor’s work and wanted to know how they did it.

Others saw the funny side and joked that it was a new species of “brinjal shark”.

One netizen ironically pointed out that it was illegal to eat sharks and said he had already called the police.

An undeniable art and know-how involved

Although some may think the video was just clickbait, the artistry and craftsmanship involved in creating the shark sculpture is undeniable.

It’s just a shame that the artwork was probably eaten.

As for the less artistic among us, we’ll stick with IKEA’s inedible shark stuffed animals if we want a toothy predator.