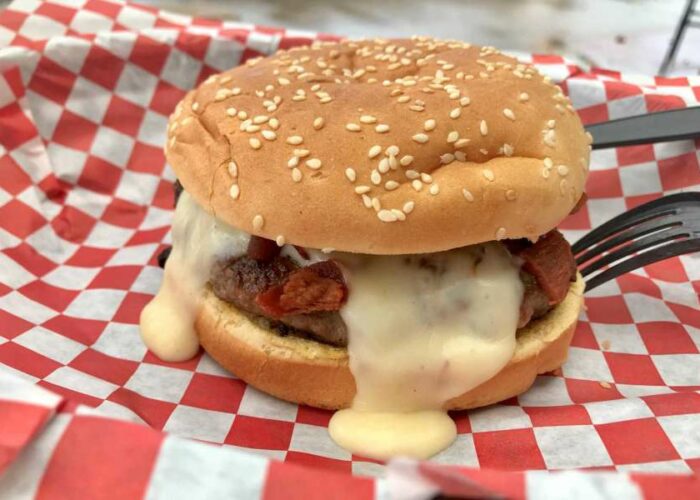 Alison Cook’s Burger Friday: The idea was better than reality at Buns & Drafts

The idea was irresistible: a burger stand in a remodeled shipping container, smack in the middle of the shipping plaza as the boulevard heads towards Second Ward.

So I went to the new one Rolls and drafts, which occupies a narrow, shaded niche just at the head of the landscaped median which hosts community events and a weekend farmers market.

Buns’ online imprint promised “homemade burgers” that were “grilled on the spot,” a quaint turn of phrase. The menu had a variety of clever topping combinations for burgers and hot dogs – sauerkraut and Japanese curry, anyone? – and the â€œdraftsâ€ tag made me dream of tasting the latest idea from one of our local breweries.

Here is how the adventure unfolded.

ORDERED : Go up to the register inside, order and pay. Then, sit inside or outside, on one of the two terraces. A member of staff will call your order or bring it to you when it is ready.

ARCHITECTURE: No salad on mine. (That’s on top of the classic cheeseburger.) On a golden yellow sesame seed bun that has been toasted, a substantial beef patty (my guess is maybe 7 ounces), followed by a generous amount. crispy bacon chips and a big splodge of pale yellow cheese fondue. There is a little stage mustard applied to the upper bun.

QUALITY: I liked the idea of â€‹â€‹this burger more than the reality.

The cheese fondue that had given me visions of a Swiss autumn valley was on the bland side, and it quickly seized up, so the glorious mess I had imagined did not materialize.

The patty itself was so decidedly well cooked, its texture so tight and aggressively ground, that it didn’t provide the juicy outside / inside thrills essential to my burger enjoyment. My first impression was of salt. I ended up wishing I had ordered the basic cheddar cheeseburger with lettuce and tomato instead.

CLASSIFICATION BY LETTER: C. A little less time on the hotplate and a little loosening of the grinds could increase the score.

VALUE: At almost $ 12 a la carte, this burger seemed expensive.

More credit is due to the generous outdoor seating options: from the covered side porch to puffy stools to the front windows, to a large side patio under the boulevard oak trees, one of which is wrapped in tiny white lights.

MINUS POINTS: Despite the promise of “drafts” in the name, they only carry a handful of canned beers from top producers. At this point in the nascent booth’s life, anyway. That could change, and I hope it will.

THINGS FOR LATER: A perfectly enjoyable chili-cheese dog with a little weight, a lot of salt, and just enough red spiciness to give it some bounce. Yes, it went well. Don’t @ me.

LOCAL COLOR : I loved everything to sit on the small covered side patio on a rainy afternoon. The vivid swirl of colors on the mural overlooking my table. The crackle of raindrops in the canopy of trees; the noise and noise of traffic passing in front of me; the peach-colored expanse of the venerable Merida Restaurant, with its elongated Chacmool twin statues, and its parade of late lunches (including a crowd of police officers) coming and going.

At one point the school must have given up because I saw a young man being driven across the street, satchel in hand, by his mother or aunt, who escorted him to ‘to Buns & Drafts for a snack.

Everything was alive and yet somehow peaceful, with the shady old cemetery next to the Church of Our Lady of Guadalupe – heart and soul of the second parish – dozing to my left, to the west.

The mix of public space and private enterprise seemed forward-looking, as did the pedestrian-friendly layout. Yes, I had to resist the temptation to park on MÃ©rida lot, or on the funeral home lot across the street; but for bikers and strollers the Esplanade seems made for, the easy going layout is soft.

Six Foods to Be a Gastro Obscura: Food Adventurer’s Guide